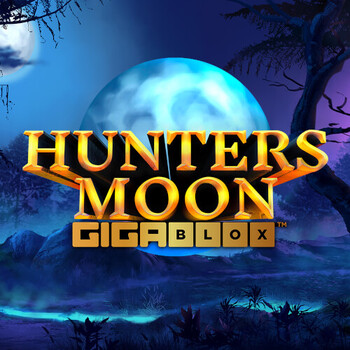 Produced by
Yggdrasil
The Hunters Moon Gigablox slot machine is the latest release from creative developers Yggdrasil and uses cutting-edge slot technology to provide players with an experience like never before. Taking place in a woodland clearing, when you play Hunters Moon Gigablox you’ll be treated to top-notch graphics and are greeted by the beautiful huntress with her flowing white locks. The aim of the Hunters Moon Gigablox game is simple: hunt down the majestic creatures of the night and land some great prizes.

As a Gigablox slot, Hunters Moon Gigablox features oversized symbols which can cover an incredible five reels at once meaning winning combinations can be formed with a single symbol instead of multiples. At the top of the reels players will find a conveyor-belt of symbols which moves one space to the left after each spin. Wild and bonus symbols (which look like crystal balls) may appear on the conveyor belt and drop down onto the main game. If a wild falls it will stream down and turn everything it touches into a wild symbol.

The Hunters Moon Gigablox slot machine is an enchanting adventure straight out of an epic fantasy tale. The graphics of this slot are absolutely beautiful and the Gigablox feature combined with the unique conveyor belt system keeps gameplay exciting spin after spin. So, if you’d like to venture into the woods under the cover of darkness then play the Hunters Moon Gigablox slot at Genting Casino today.