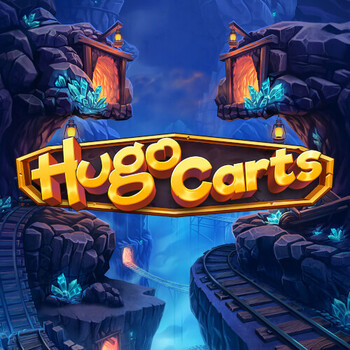 Have you met Hugo? He’s a gaming character that has been around since the 1990s and he’s finally made his way into your favorite slot machine gameplay. Hugo is a lovable troll that can accompany you into the crystal mines and together find the way to fortune and treasure in a game of Hugo Carts.

Set in a 5x4 reel grid, this game has a theoretical Return to Player rate of 96.23% and a high volatility level, making it the perfect game for the thrill-seekers and the risk takers.

Landing 3 or more matching symbols on one of their 1024 winning paylines starting from the leftmost side will constitute a win. Low paying symbols are represented by A, K, Q, J, and 10 royal card symbols that can pay 0.10-1.50 your stake for 3 or 5 of a kind. Premium symbols are represented by mining objects such as a shovel, a pickaxe, a lantern and a mining hat that can pay 0.75-4.50x your stake. The Wild is represented by a bag of gold nuggets that pay 4.50-15x and can substitute for any other symbol except the Scatter.

The Scatter is represented by three dynamite sticks tied together. Landing 3, 4, or 5 of them on the reels can trigger 7, 9, 0r 11 free spins, respectively. Don Croco can also appear randomly during the base game and throw 2 Scatters on the reels, so watch out for that!

There are three characters you can meet in the form of Special symbols that have their own features: Hugo  adds 2-5 golden nugget wilds on the reels randomly, Hugolina adds 2 to 5 multipliers with values of up to 10x, and Scylla creates 5 to 9 mystery symbols that transform into matching paying symbols.

Hugo Carts is playable on any mobile device with Genting Casino. How on the cart and start your crystal adventure. Just remember to set your budget and spin while it’s fun, not futile!