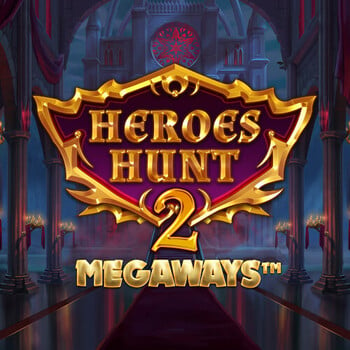 Meet the Wizard, Warrior, and Archer as they return for another spectacular adventure in this Heroes Hunt 2 slot. The scene here is a Gothic castle chamber lighted by candles

6 reels are used in this slot machine. Because of the blocker positions, there can be anywhere between 64 and 46,656 different ways to get a winning combination on each spin. 3 or more matching symbols or wilds must appear on adjacent reels from left to right, starting on reel 1, to produce a winning combination.

When the Wizard has been unlocked, the Explosion feature can start if an Explosion symbol lands on reels 2, 3, 4, or 5. Then, 22 or 33 symbol blocks detonate and are replaced with the same standard symbol. The new symbols in place are then given a new payout evaluation.

When the Warrior has been unlocked, the Expanding Wild symbol can appear on reels 2 through 5. The entire reel on which it appears is then filled by the wild. It may also have a multiplier applied that ranges from 2x to 6x. When multiple multiplier wilds are landed in the same winner, their values are added together.

The Treasure Chest symbol on reel 6 has the potential to award both the Werewolf Bonus Spins and the three modifiers. Watch out for Werewolf Wilds, which can appear on reels 2, 3, 4, and 5. The Warrior, Archer, or Magician symbols that are to the left, right, up, or down of a Werewolf Wild also become Wild symbols.

Two Super Bonus Spins will be awarded to you after the feature is activated, and they will be used to play out on the completely extended reels' 46,656 Megaways. This round's winning combos receive a whopping 100x multiplier boost.

Enter into the magical world as you sign up for Heroes Hunt 2 slot on Genting Casino which is available on your mobile device. Just be sure to stay within your allowed spending range.