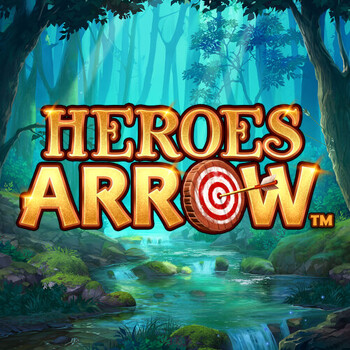 Produced by
Playtech
The Heroes Arrow slot from Playtech takes its inspiration from the medieval tale of Robin Hood and features archers prominently in its slot mechanic. Set in a wooden glen, the Heroes Arrow slot machine has an exciting mixture of bonus features and includes a jackpot of 500x your wager. Keep on reading to find out more about this slot game.

The Heroes Arrow slot online has a standard 5x3 video slot format and uses 20 pay lines. Top payouts for this slot sit at a respectable 500x stake and features include free spins, scatters, wilds, and a game called Arrow Shots. The Heroes Arrow online slot has a hearty return to the player of 96.38% and is played at medium volatility.

The symbols used in the Heroes Arrow game are suited to the Robin Hood theme and include an archer, maiden, soldiers, castles, goblets, money bags, and targets. The low-paying symbols are represented by playing cards 10-A.

When you play Heroes Arrow you’re in for a whole host of bonus features starting with the wild symbol. They appear on reels 2-5 and can stand in for all other symbols aside from the scatter symbols.

The fifth reel is displayed at a slight incline which makes it the perfect target for the archer symbols that can land on the first four reels. Landing a target symbol on the fifth reel while an archer is present will trigger the Arrow Shot feature. The archer will take a shot at the target and award players with an instant cash prize. The green archer will award between 2-8x your wager, while the red archer can award one of these prizes or one of the jackpot values.

At Genting Casino, you can journey back to the Middle Ages at any time you like and play the Heroes Arrow slot. If the Heroes Arrow slot game isn’t calling your name, however, then don’t worry because we also have a huge selection of slots, live casino games, and table games too. Play today!