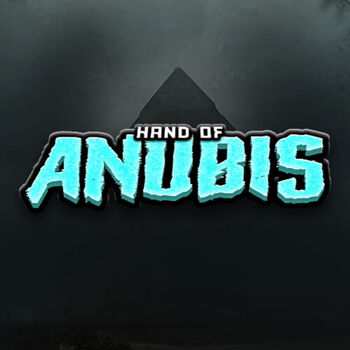 Let the jackal of Egyptian mythology lend you a hand on your journey, not to the afterlife, but rather the chance of a reward in the Hand of Anubis. This slot game is brought to you by the edgy developers at Hacksaw Gaming. Just like Anubis weighs the departed one's heart on the scale with a feather in lore, this is how he will also weigh your chances at winning spins. A layout not for the faint-hearted, Hand of Anubis sets players against two split images of the deity, one blue-eyed and the other red-eyed with menacing looks plus the dark palette that really captures Hacksaw Gaming's vision for an edgier take on your usual Egypt-themed slots.

The gameplay is of 30 symbols falling down a five-column six-row grid with a goal of adjoining clusters of at least five matching symbols. High on volatility, the RTP cascades on four variables of 96.24%, 94.32%, 92.28%, and 88.41%. Building clusters equip the players with 10 normal tiles to do so. The game features are impeccable. First off are the soul orbs which you can get as either a red or blue variant or both at random. Having a win with any orb will apply a multiplier and multiply itself if there is more than one win. The Underworld bonus on the other hand is activated by three bonus symbols that bring you to the darker visual of the afterlife. Multipliers have a max value of 9,999x each. Judgement feature is triggered by 4 bonus symbols, in this game mode regular blocks are removed to make way for either blank or special blocks. A bonus buy is also included for a fast ascendance to the Underworld or Judgement.  Take a change of heart into the Hand of Anubis here at Genting Casino.