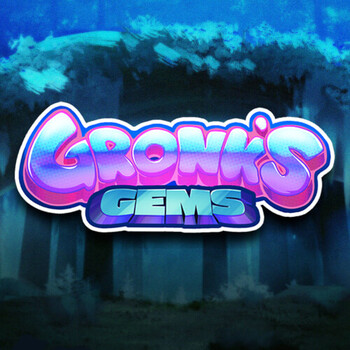 Produced by
Hacksaw
Meet an amiable cave troll who enjoys gathering gems in Gronk's Gems game from Hacksaw Gaming. The game is played on a 66 grid with Cluster Pays, and when the Epic Gem scatter symbol lands, there are cascades of charging symbols that come to life. The Gem Hoarder feature has two bonus spins features and a progressive multiplier that rises with each deleted symbol. The X-Gem symbol-attached winning clusters are subject to that multiplier. 7,500 times the maximum bet can be won as a result. With an RTP rate of 96.24 percent. Play Gronk's Gems to know more.

A Cluster Pays mechanic and a 66 grid are used in The Gronk's Gems online. When five or more matching symbols appear next to one another, winning combinations or clusters are created (in a cluster). The reward increases with the number of symbols in a cluster. See our article on Grid Slots for additional details on this genre of game.

The range of bet options every spin is 0.10 to 100. This is essentially the stake range that Hacksaw Gaming slots have to offer. Use the up and down arrows to adjust the Bet section as necessary. When you change the size of your stake, all rewards that are listed in the Paytable will also change.

The Gronk's Gems online slot, which has a troll motif, is named after Gronk, a hulking but kind cave troll who collects gems. He resembles a combination between Panthro from the Thundercats cartoon series and the Middle Earth trolls from The Lord of the Rings.

The colour pattern is dominated by blue and is set in a dismal woodland. You can see the grid with Gronk to the left and the symbols lighting up. In addition to blue octagon, purple hexagon, gold star, and orange diamond gems, they also feature green, blue, pink, and yellow uncut stones. The orange diamond gem symbol is the best payer, paying 1,500 times your entire wager when 36 or more of them appear in a cluster.

There are no wild symbols, which is unusual. However, you will see Gronk's head, the Gem Bag, Gronk's head, and Epic Gem Scatter icons.

Gronk's Gems slot machine has amazing features. Other symbols illuminate when winning symbols charge them. The grid above shows the charged symbols, and they remain charged all the way through the cascade sequence. Winning symbols are eliminated, and the dropping down of new and/or existing symbols allows for an infinite number of additional wins per round.

After a cascade, the Epic Symbol may show up in one of the open slots, and it triggers its modifier at the conclusion of the cascading sequence. By doing this, the greatest value charged symbol is created from all charged symbols. After being absorbed by the Epic Gem, the changed symbols constitute a winning cluster. You just need to have one charged symbol in view to take use of the Epic Gem since it counts as 4 symbols in total.

The Gronk's Treasure Bonus Round, which offers 10 bonus spins, can be accessed by landing three Gronk's Head scatters anywhere on the screen. You now have a greater chance of obtaining the Epic Gem symbol than you had in the standard game.

When three gem bag scatters appear in the field of vision, the Gem Hoarder Bonus Round is activated. Five bonus spins are awarded, and the number of spins is reset to five any time three gem bags appear simultaneously throughout the feature. During this bonus round, the charged symbols feature is not active, but each winning symbol that is eliminated raises the overall win multiplier by one. Each time an X-Gem connects with a winning cluster, the multiplier increases that cluster's chances of winning.

The Gronk's Gems is extremely Hacksaw Gaming in terms of aesthetics: excellent, crisp graphics and animations with a slightly ominous vibe. When an Epic Gem scatter symbol lands, the gameplay features cascades and charged symbols that spring to life. For a victory that is assured and an additional spin/cascade, the Epic Gem Scatter now absorbs charged symbols. The 7,500x maximum win justifies the risk. Play Gronk's Gems and win.