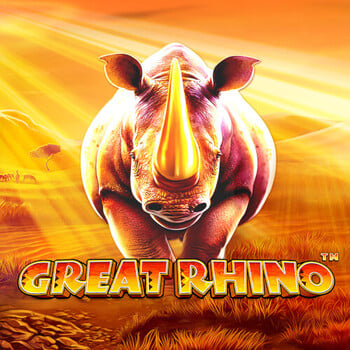 Produced by
Pragmatic
With its appealing animal theme, excellent visuals, and many ways to win, Great Rhino slot is a great game to play. Try it out and see for yourself. The main character of this Big Time Gaming slot is the majestic Rhino who lives in Africa. Unfortunately, the savannah is a dangerous place and peril is just around the corner. This time, poachers threaten their future.

Can you hear that roaring noise in the distance, getting louder and louder? It's definitely the rhino, the protagonist of Great Rhino Megaways, an online slot machine produced by Pragmatic Play that implements the feature invented by Big Time Gaming.

For those who play Great Rhino, you will have realized that the setting is in the wildest savannah. A place where time seems to have stopped and where animals are the real rulers. The sound effects, inspired by the voices of nature, will immediately make you realize this. A versatile online slot game that allows you to bet from 1 to 10 coins.

Great Rhino slot online offers you some extra features that will enhance your winning chances. Moreover, you will not find the traditional five reels, but six. Furthermore, Great Rhino provides players with 200,704 different ways to win. Not all of them are activated on every spin and the number of Megaways is random and can change from spin to spin.

The other important feature is the Super Re-spin which is activated if you get two or more stacks of rhinos on any reel. During this feature, the game will pay you regular winning combinations and the rhino stacks will remain fixed on the reels. The round will start with three re-spins and during the round only rhino symbols will be involved. Play Great Rhino slot today.

To win at the Great Rhino online slot, you need to line up at least three adjacent symbols. This means that all symbols of the combination must touch each other. If there is a gap between two symbols, the combination is not a winning one. The only symbol that gives you a reward — even if you find only two — is the cheetah. The RTP of this slot can be as high as 96.58% and never drops below 96.47%. This means that the slot has high volatility. However, the winning frequency is lower, but the rewards are significantly higher.

In an African safari environment you will encounter rhinos, lynxes, hyenas, and pink flamingos. The rhino is the Wild symbol and substitutes all other icons to give you winning combinations, while the tree symbol is the Scatter. It activates 10 free spins if it is found at least three times in the entire pattern. As a result, you can win one of the jackpots.

Playing cards from 10 to ace are the first set of symbols in this Pragmatic Play slot. Then we have five typical animals of the savannah, namely: the gorilla, the hyena, the cheetah, the pink flamingo and the crocodile The rhino is the wild symbol, which substitutes everything except the scatter. However, the rhino can only appear on reels two to five and on the top row.

The golden coin depicting the rhino is the scatter symbol. It appears on all reels and triggers free spins. You must choose how many free spins to use and which multiplier. Moreover, there is the Fall Function. After each spin, you are paid winning combinations and all winning symbols disappear. Those that remain 'fall' from the screen and the new symbols cover the empty positions.

This is an ideal slot for both expert players and beginners. A unique game in a dangerous and fast moving environment. With huge jackpots, a new fall feature and high rewards, you are in for a big catch. What's more, you don't have to make an upfront payment before playing. With its high volatility you will surely enjoy a wide choice of prizes.