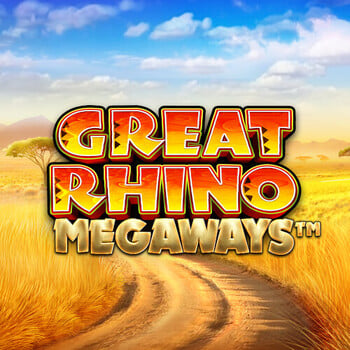 Produced by
Pragmatic
Meet the wildlife of the African plains in the Great Rhino Megaways slot, a release from Pragmatic Play. This game takes players on a volatile adventure through the vast African savannah where they will meet various wild animals. On the way, various bonus features can come into play. They include tumbling reels, free spins, win multipliers and a max win of 20,000x the bet.

Head for an African wild adventure with Great Rhino Megaways

Players can play Great Rhino Megaways slot on a grid that offers 6 reels and 2 to 7 rows. However, there is an extra horizontal reel between the second and fifth reels which means at full power, the game offers up to 200,704 paylines. Additionally, the 96.48% RTP is quite good since it is above the average for a typical slot machine.

The stake levels of the Great Rhino Megaways slot online suits players of all budgets. Bets begin at 0.20 coins and go all the way to 100 coins per spin. Furthermore, the game offers options for setting automatic spins as well as win/loss limits. That said, this African wild adventure is a highly volatile one with the maximum win capped at 20,000x the bet.

Players will encounter a wildlife theme when they play Great Rhino Megaways slot. The background features the sunny African savannah and on the reels, various symbols can be seen. They include stylized royal symbols alongside flamingos, bears, cheetahs, crocodiles and gorillas. The most lucrative symbol is the cheetah which is worth 50x the bet for six of them on adjacent reels.

Some special features are common in slots that use the Megaways mechanic. One of them is the Tumble Reels feature and in this game, it is triggered automatically when a win is formed. As a result, all winning symbols disappear and new ones appear to replace them. The game then awards a payout with the feature continuing until no other wins are formed again.

For the third package, 5 free spins and a 10x multiplier will be awarded. Finally, a random amount of spins and a random multiplier will be awarded for the fourth package. Furthermore, players can retrigger the feature by landing three more scatters, and they will receive 5 extra free spins. What's more, the number of retriggers isn't limited which means more winning opportunities.

Megaways slot machines always rock and Great Rhino Megaways is no exception. The wildlife theme comes out nicely and the visuals and soundtrack have been done well. Talking about features, the win multiplier can greatly boost payouts during the free spins feature. However, players should always play carefully as the game is highly volatile. That said, Great Rhino Megaways is available at Gentingbet.