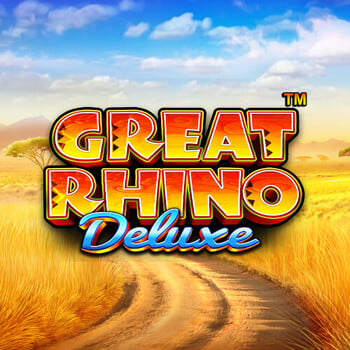 Great Rhino Deluxe is played on a 5 reel format that offers players 20 paylines. Players can start the game with the bet starting from 0.20 up to about 100 per spin. The game is rated to have a volatility of medium. The return to player for this game is averaging to about 96.5%. Players can start winning by landing winning combinations starting from three to five matching symbols.

The game's symbols line up starts with the Q-A symbols followed by the animals - hyenas, flamingos, gorillas, crocs and cheetahs. The most valuable regular symbol here is the rhino symbol that is worth 20 times the stake for a combination of five of a kind. The wild symbol in this game is represented by the golden rhino coin that payout on a two of a kind, or up to about 25 times for a five of a kind.  And as a wild, the golden rhino coin symbol can also replace all other symbols to create a winning line but cannot substitute for the scatter.

Great Rhino Deluxe offers two amazing features - Super Respins and the free spins. When two stacked reels of rhinos land on the same spin, the super respin feature is triggered. The two stacks are locked in place and three respins are awarded. The Major Jackpot in the game is worth 375 times the bet.  While the Grand jackpot is at 500 times the bet when 15 positions are covered with rhinos.

The game offers a lot of features that will be sure to keep players on the edge of their seats. Great Rhino Deluxe offers a refreshing and an adventure packed theme that is sure to enthrall traditional players as well. Enjoy the African trip and embark into your own safari adventure. Remember to play to your comforts and to bet responsibly.