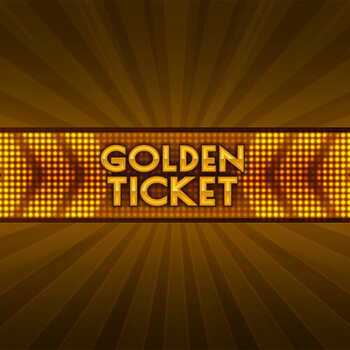 Produced by
Oryx
Experience all the wonders of the circus in Golden Ticket, Play’n GO’s popular slot. This stunning 5 x 5 game features a high-paying Wild, a Free Spins round with up to 20 spins available per game, and a maximum potential payout of 411,561 coins. So, what are you waiting for? Take a trip to the big top and start spinning! 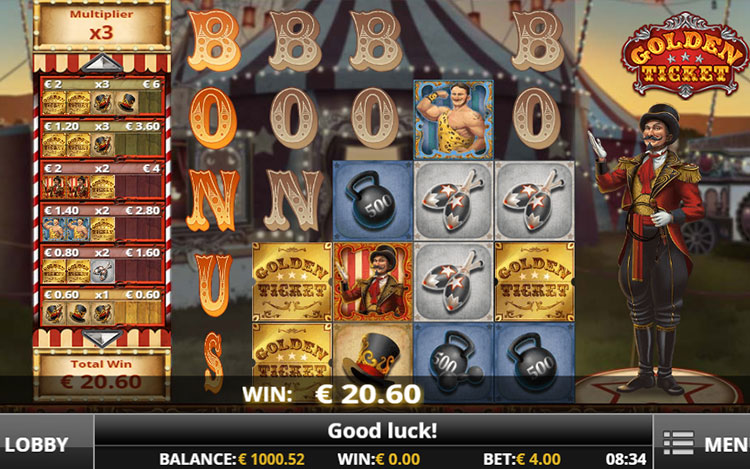 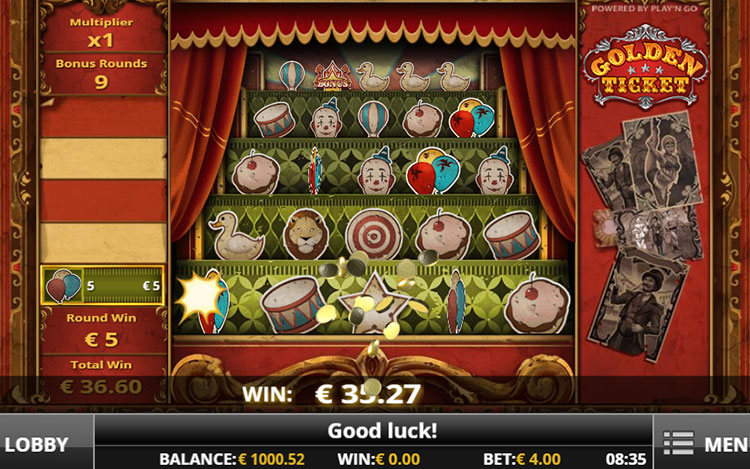 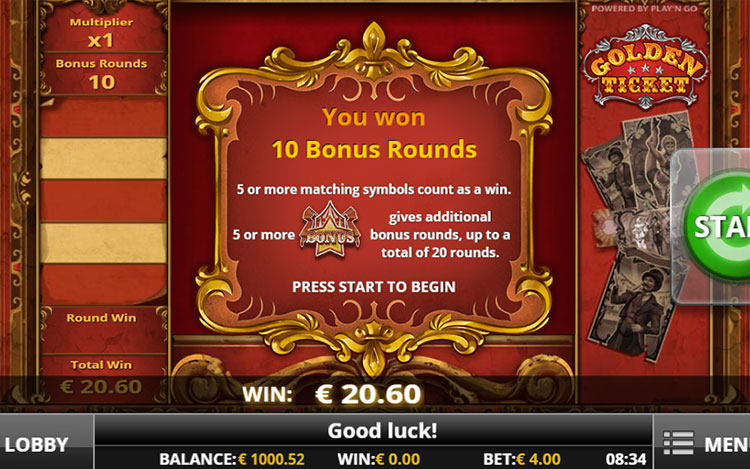 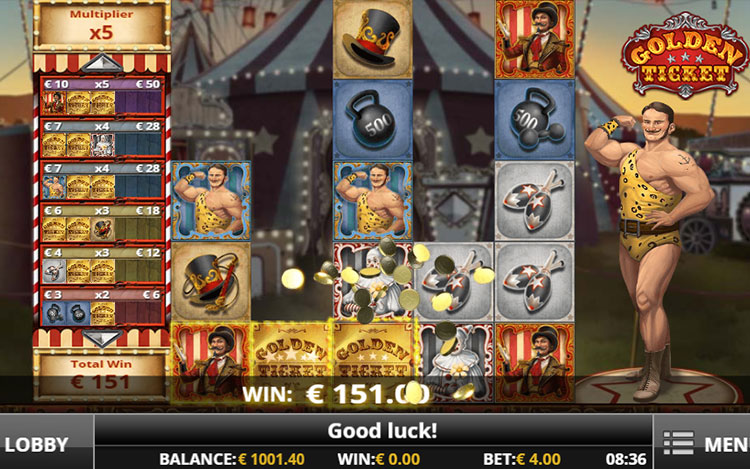 Play’n GO released Golden Ticket in 2018, and a sequel has hit the market since. The Golden Ticket game is set in a traditional circus, featuring the characters and props you’d expect to see.

Its fantastic circus-themed symbols include the Ringmaster, Strongman, Clown, Ringmaster’s Hat and Whip, Weights, and Juggling Clubs. Each symbol looks fantastic, especially those featuring characters — they’re intricately detailed, colourful, and are easy to tell apart on the reels.

The symbols award specific prizes based on how many you match in a row. The Ringmaster is the highest-paying symbol, while the Kettle Bell pays the least. Here’s a quick rundown of how much some symbols pay for 5 in a row:

Subtle animations bring the symbols to life on the reels — watch as the Strongman smiles and fleeces his bicep and the Ringmaster waves his hand. An animated version of the Ringmaster, Strongman, or Clown will stand next to the reels during the base game, too.

And let’s not overlook the stellar audio: the sound effects and music create an authentic circus atmosphere, with the performers’ shouts and audience chatter playing while you spin.

The Golden Ticket slot game uses the titular ticket as its Wild symbol. This substitutes for all other symbols and awards the following prizes:

The Wild symbol won’t appear during the Free Spins feature.

You’ll trigger the Golden Ticket’s Free Spins feature round if you clear one or more reels while the vertical “BONUS” sign appears behind their symbols. A different set of reels is used during the Free Spins feature, and the gameplay is modelled on a traditional fairground shooting gallery. Targets include a Clown, Elephant, Lion, Star, Balloons, and more. Match 5 or more to win.

You can also win more free spins if you get 5 or more Bonus symbols, with up to 20 available. Each Bonus that features in a winning combination will award you an extra free spin. 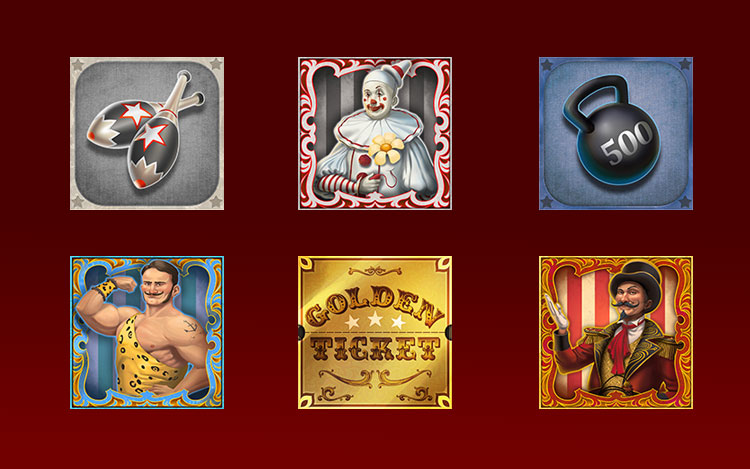 Golden Ticket is easy to play, with simple controls and a user-friendly layout. When you’re ready to get started, use the START button on the right-hand side of the control panel. This will spin the reels and fill the 5 x 5 grid with a random set of symbols. You need to connect 3 or more matching symbols in a row, vertically or horizontally.

The number of symbols matched, and their respective values, will determine the size of your win. For example, 5 Ringmasters will pay more than 5 Juggling Clubs.

The cascade feature in the Golden Ticket slot online allows you to chain wins together. Here’s how it works: Any winning symbols will vanish from the grid and remaining symbols will drop down to fill empty positions. You may be able to create new winning combinations and increase the win multiplier. That means it’s possible to win several times on each spin if symbols continue to match in rows of 3 or more.

Want to set your stake to your preferred level before you start spinning Golden Ticket’s reels? Just click one of the bet buttons at the bottom of the screen, or press the PLUS and MINUS buttons, to scroll through the bets available. You can choose from multiple stakes between £0.20 and £40.

You can check out the Golden Ticket online slot paytable at any time — tap the PAYTABLE button on the left-hand side of the control panel to open it. Here, you can browse the range of symbols active during the base game and compare their payouts. You can also find information on the Free Spins feature and the symbols used.

If you want to read more details on how to play Golden Ticket, press the “?” icon at the bottom of the screen.

What is the maximum bet for Golden Ticket?

In Golden Ticket, you can bet a maximum of £40.

What is the minimum bet for Golden Ticket?

The minimum bet you can make in the Golden Ticket slot machine is £0.20.

Can I play Golden Ticket on mobile?

What is the RTP of Golden Ticket?

What is the biggest potential win for Golden Ticket?

The biggest potential win in Golden Ticket is 411,561 coins.

Since its founding in Sweden in 1997, the company has released hundreds of online slots in a variety of genres and themes. The portfolio includes games about secret agents and superheroes, gemstones and graffiti artists, forgotten civilisations and ancient deities, and much more. Play'nGO is a major provider of custom, all-encompassing solutions for the online gaming industry. Play n'GO has produced goods like as their original independent platform, a variety of high-quality casino games, and mobile and tablet gaming solutions using cutting-edge technology. The executives and staff at Play n'GO have extensive industry experience, and their products are known for their quality, adaptability, and dependability. Play n'GO are well known for the great mobile compatibility of their games which include titles such as Jewel Box, Irish Gold, and Tower Quest.

Let Golden Ticket transport you to a classic circus, where you can marvel at the strongman and clown while you play for up to 411,561 coins. But there’s more: Golden Ticket also includes a fantastic Free Spins feature with its own set of reels and a cascade mechanic to help you achieve consecutive wins from a single spin.

Play Golden Ticket and a massive variety of other slots, table games, and live casino games at Genting Casino today!