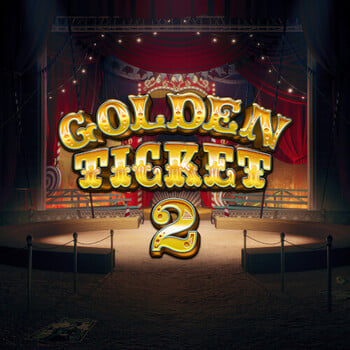 Produced by
Play N Go
Golden Ticket 2 slot is a 1920s circus-themed 5x5 cascading grid slot. The game's most important icons are the Ringmaster, a Knife-Thrower, and a Clown, all of which are world-famous figures from the "Big Top." There are many bonus features that will add to the circus excitement of the Golden Ticket 2 slot game. Golden Ticket 2 online slot is a Play'n Go 5x5 cascading video slot that provides players the potential to win up to 5,000 times their bet. Play'n Go is a developer noted for their clever and intriguing slot machines.This high volatility slot has a 96.5 percent RTP. In the Golden Ticket 2 slot machine, you can place a variety of wagers, which are all listed on the ribbon beneath the reels. With 20 fixed paylines and a tent surrounded by clowns, ringmasters, and other big top characters, the minimum bet is only 0.20 and the highest stake is 100.

Filling the meter with three parts will activate the Multiplier Wilds feature. This is accomplished by forming winning combinations of high-value character symbols. Fill 1, 2, or 3 sectors of the meter by matching 3, 4, or 5 symbols on the grid.

Once the meter is full, 1 or 2 wilds are added to the grid at random. Each wild symbol corresponds to a distinct character symbol. The character wild you see depends on which character is active beside the grid. When the Multiplier Wild symbol appears, the win multiplier is increased.

The word BONUS is spelled out behind symbols on the reels (the position changes with each spin), and if you can fully display BONUS, the major bonus round will be triggered.

You'll be given three alternative Free Spin selections after the feature has been triggered. These are the following:

In addition, all Free-Spins selections include a unique "Win Spins" feature. You'll get a Win Spin if you fill three segments of the meter (by landing winning combos with the higher-paying symbols). This results in a 2X2 multiplier Wild being added to the reels. Golden Ticket 2 slot online is a grid slot, which means that winning combinations differ from those found in standard video slots. Landing three or more similar symbols vertically or horizontally adjacent to each other results in a win. On each spin, you can land multiple pairings. Place your bet on the ribbons below and start spinning. The actual gameplay is as follows: with each spin, 25 symbols are thrown onto the grid. Landing three or more matching symbols that connect horizontally or vertically results in a win. After winning combinations have been paid, any leftover symbols drop to fill in the gaps, potentially resulting in fresh winnings. The win multiplier increases by one with each additional drop, then resets to x1 on a new base game spin.

The paytable is filled with circus icons, with five low-paying symbols and three high-paying symbols. A monocycle, juggling items, a target, knives, and a ringmaster's headgear are among the low-paying symbols. A winning line of 5 low symbols pays out 2 to 4 times the bet. The show's high-paying characters include a clown, a blindfolded knife thrower, and a ringmaster. When you hit a 5 of a kind combination of the high paying symbols you get a pay out of 10 times the stake. For lines of three or more "mixed" premiums falling horizontally or vertically, players can win a consolation bonus of up to 5x.

What is the maximum bet for The Golden Ticket 2 slot?

The maximum bet for the Golden Ticket 2 is 100.

What is the minimum bet for The Golden Ticket 2 slot?

The minimum bet for the Golden Ticket 2 is .20

Can I play The Golden Ticket 2 slot on mobile?

Yes, The Golden Ticket 2 is fully optimized for Android and iOS.

What is the RTP of The Golden Ticket 2 slot?

What is the biggest potential win for The Golden Ticket 2 slot?

The biggest potential win for The Golden Ticket 2 is 500000.

Since its founding in Sweden in 1997, the company has released hundreds of online slots in a variety of genres and themes. The portfolio includes games about secret agents and superheroes, gemstones and graffiti artists, forgotten civilisations and ancient deities, and much more. Play'nGO is a major provider of custom, all-encompassing solutions for the online gaming industry. Play n'GO has produced goods like as their original independent platform, a variety of high-quality casino games, and mobile and tablet gaming solutions using cutting-edge technology. The executives and staff at Play n'GO have extensive industry experience, and their products are known for their quality, adaptability, and dependability. Play n'GO are well known for the great mobile compatibility of their games which include titles such as Merlin and the Ice Queen Morgana, Rise of Merlin, and Temple of Wealth.