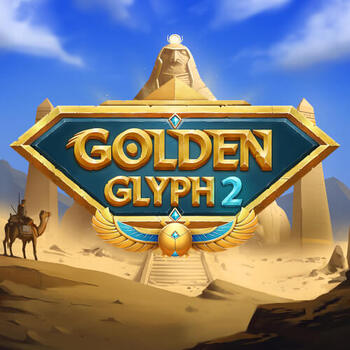 Refined gaming features, cranked up potential, on top of a refreshing new look, the Golden Glyph slot proves that it's not just “yet another Egyptian themed game from Quickspin”! Perfect for players looking for an exotic slot gaming adventure, this game takes place on a 7x7 brightly illustrated grid inside a wadi, with a view of pillars, cliffs, and an airy temple in the background.

With a bet range between 0.20 to 100 per spin, the RTP is currently set at 96.09% by default. Additionally,  Golden Glyph 2 also offers three feature buy selections, each of which has an increased theoretical return of 96.3% to 96.6%.  On the other hand, volatility has also climbed to a 4 out of 5.

As for reel pay symbols, a set of familiar and theme-fitting icons have been used. Among this set are the water symbols, eyes, Ankhs, and serpents which are found on the lower half of the paytable, followed by the higher value characters like the Pharaoh, Queen, and a symbol that resembles Horus. The largest clusters, with prize amounts ranging from 75 to 150 times the wager, contain 15 or more matched symbols.

Although this range of rewards may seem average to a keen observer, a number of thrilling bonus features have been added to make up for it. The standard, wild "W" tile with wings is another symbol to keep an eye out for. In essence, it acts as a stand-in for any standard pay symbol to extending a helping hand in creating a winning cluster.

Take on an exciting new slot gaming escapade by registering to Golden Glyph 2 on Genting Casino, available on all mobile devices. Remember to set a strict gaming budget and only play within your means.