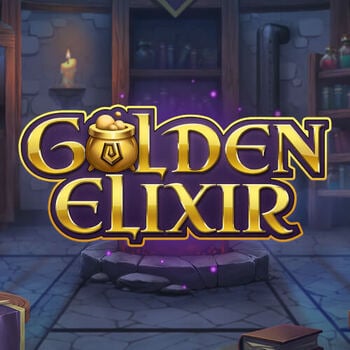 Produced by
Games Global
Enter an alchemist’s room littered with magical trinkets and objects in Half Pixel Studios’ Golden Elixir online slot game! Be enchanted by the Golden Elixir game’s simple gameplay as well as the game’s features such as its random Enchanted Wild Stacks and free spins. The Golden Elixir slot game is playable on all devices so you can take the magic everywhere you go, and it even gives you a chance to win over 2400x your bet!

The Golden Elixir slot machine is a magical slot game that features various potions as its symbols. This slot game from Half Pixel Studios is played on a 5 reel by 3 row slot game layout which gives you up to 243 ways to win. The gameplay is quite simple here and winning only requires you to land 3 to 5 matching symbols on adjacent reels starting from the leftmost reel. The game’s high-paying symbols are different types of elixirs which can pay between 4x to 10x your stake for five matching symbols, while the low-paying symbols are made up of card royals. The silver W symbol is the Wild symbol which can substitute for all regular pay symbols, helping you complete winning combinations.

The silver W wild symbol can substitute for all symbols to complete winning combinations, but this is not the only feature it possesses, and it is also not the only special symbol in the Golden Elixir slot online. There’s also the Free Spins Scatter for free spins.

Aside from helping complete winning combinations, the silver W wild symbol can appear stacked on the middle 3 reels. The Enchanted Wild Stacks Feature is a randomly triggered feature in the base game. When this feature triggers, you can see the 3 middle reels highlighted. Super Stacked Wilds will then appear on these reels and can possibly fill the entire reels.

The Free Spins Scatter is required to activate this feature. These symbols appear on the three middle reels of the game, only during the base game. The Scatters come with numbers attached to them and you need at least three Scatters to trigger the Bonus Round. The numbers attached to the Scatter will be added to show you how many free spins you get. You can get between 2 to 15 free spins and the Enchanted Wild Stacks feature is triggered on every spin in the bonus round.

If you enjoy slot games with the magic-theme, or if you’ve been looking for a slot game with beautifully designed symbols and simple gameplay, then Half Pixel Studios’ Golden Elixir slot game should definitely be on your list! You can play the Golden Elixir slot at the Genting Casino website and get a chance to win over 2400x your stake as you spin the reels! Not only that, but you can even get free spins and stacked wilds in this slot game! Come on over to the Genting Casino today!