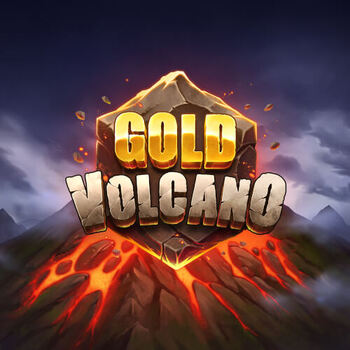 Gold Volcano gives you a chance to gain a rumbling high win prizes as time goes by. The grid itself, which has 8 columns set up in a 3-4-5-6-6-5-4-3 arrangement to create a mountainous shape, is where the rumbling begins. The grid's faded white dots above it make a suggestion about what might happen when it expands during bonus features. The game has a Return to Player rate of 96.2%.

Players must land 4 or more matching symbols touching each other either vertically or horizontally to form a winning cluster in this slot machine, which is playable from a minimum of 10  up to a maximum of 100 per spin. Winning symbols are then taken out of the grid, as you might anticipate from the game's design, to make room for new ones to fall into the spaces. There won't be any more winning clusters until the cascade mechanic stops. The low-paying suits are Diamonds, Clubs, Hearts, and Spades. Four gems in the colors Purple, Red, Green, and finally the Gold symbol have the highest payouts. Here's why gold symbols are by far the most looked. The value of clusters of 30 or more inferior symbols can reach 35 times for the green gem. However, if you get 30 or more Gold symbols, your wager is worth 1,000.

In addition to a bonus game that can be triggered, Gold Volcano offers several during the base game. The Dormant feature can show up during any losing spin in the base game. One of three effects is brought into play when activated: All of the grid's symbols are shuffled in "Rumble" to give players a fresh chance to win. In the process, a scatter symbol is also produced.

Lava: Any symbol, excluding the scatter, is created with an additional layer.

Excavate randomly places three to five wilds on the grid.

The glowing rock scatter, which is the key to the Crystallization feature, should be kept an eye out for. Each time three scatters are collected, one of the lower-paying groups is turned into a gold symbol. With the exception of when the bonus feature is triggered, the collection/transformation process resets at the conclusion of each spin. In that case, the progression keeps going and isn't stopped.

Register at Genting Casino available on all mobile and desktop devices and remember to play moderately.