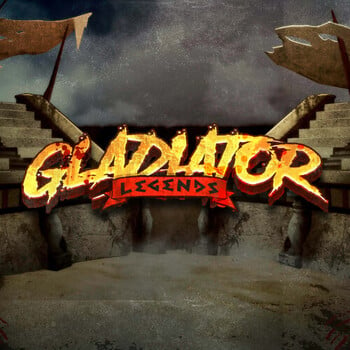 Produced by
Hacksaw
Gladiator Legends Slot Online has excellent graphics. It looks like it took inspiration from pages of Frank Miller’s works. The Gladiator Legends slot features a four-row, five-reel structure with ten paylines on which winning combinations can be constructed. There is also an ideal betting range that will appeal to high rollers as well as gamers who prefer to play it safe and stick to lower stakes. The betting options start at 0.10 and go all the way up to 100 each spin. Gladiator Legends Slot Machine has a maximum win of 10,000 times the stake.

The Gladiator Legends Slot Game RTP is 96.31 percent, with a Hit Frequency of 26.71 percent. Gladiator Legends Game is a highly volatile slot which means that there could be stretches without wins but gives way for possible large wins. As you play Gladiator Legends slot, you will notice it is designed with horrific graphics that properly depict the theme's harshness. Five low-value 10-A card royals and five bloodied war instruments make up the pay symbols. When five identical symbols appear on a payline, the payment is 0.5-1 times the stake if the payline is made up of low pays, or 5-30x the wager if the payline is made up of high pays. Growling lion wilds can appear on any reel and replace any symbol, high or low paying. If five wilds appear on a line, they are also worth 30 times the stake. One of the highlights is the Bear Bonus. This feature can be triggered by landing three bear Scatters in a row. This will earn you three respins which will be reset each time a VS symbol appears on the reels. At the start of the game, reels 1, 2, 4, and 5 are unlocked, while reel 3 is chained. To break the chains, you'll need to land VS symbols on the other four reels.

Gladiators are warriors and to match the theme the bonuses are battles.

In the main game, these symbols will spread to cover the entire reel. This transforms into a Duel Reel, which eventually transforms into a wild reel, on which two gladiators will battle. Each of them has a multiplier, and if the wild reel is part of a winning combination, the winning gladiator's multiplier is applied to the prize.

Champions of the Arena

At least three gladiator scatters must appear on the screen at the same time to activate this feature. This will grant you three respins, with the number of respins reset each time a VS symbol appears on the reels. Each reel will have its own multiplier, which will be decided by the gladiator duels that the VS symbols initiate.

Two types of multiplier coin symbols might appear on the reels during this feature:

At the end of the feature, the sum of all reel multipliers is added together, multiplied by the selected bet, and then rewarded to the player.

The best place to play Gladiator Legends is at Genting Casino. You can choose from a wide selection of slots, table games and live casino games for Genting Casino. Gladiator Legends delivers the action on this highly engaging slot game. Loaded with features that both new players and returning enthusiasts can enjoy. It is a possibly highly rewarding slot with excellent graphics which is an absolute must try and no better place to check it than Genting Casino online wherever you are at the moment on any device.