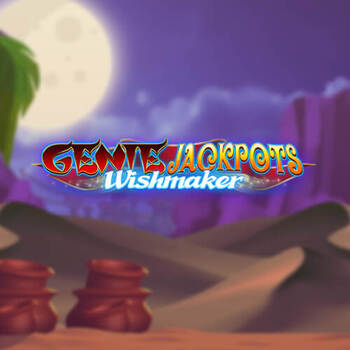 Produced by
Blue Print
If the thought of magic lamps and blue genies excites you, then you'll want to play the Genie Jackpots Wishmaker slot. Blueprint Gaming doesn't disappoint with this instalment in the Genie Jackpots series, with its bonus features and high-quality graphics. Not a seasoned player? You'll be glad to know that it's accessible for low rollers and jackpots great for low-risk players.

Make all your wishes come true with Genie Jackpots Wishmaker

When you play Genie Jackpots Wishmaker, you'll be whisked away to a cave filled with bright bejewelled colours, magic lamps and lanterns. Keeping to its Arabian theme, it also features Arabian-themed symbols. Jewels, spellbooks, jewelled turbans, and cross swords. These are just some of the colourful symbols awarding you anywhere between five to 15 times your bet for five matches.

Look out for the game logo symbol, as this can award 25 times your bet for five matches. Like its predecessors, you can expect many attractive bonus features when you play Genie Jackpots Wishmaker slot online. This time, the genie himself is controlling the wheel. You'll be able to trigger six bonuses and seven modifiers, which you can activate entirely at random.

Why should you play Genie Jackpots Wishmaker slot? It boasts a five-reel, three-row layout, giving you a standard look to the gaming screen. It's a game of low risks and high rewards. The minimum bet is so low you can use coins to play, and you could achieve a 96.06% average RTP. Wishmaker has a medium volatility rating, making this highly playable for everyone.

You can trigger the bonus wheel by landing three or more Scatters, prompting the genie to appear and spin the wheel. Essentially, you'll be achieving a win when three or more matching symbols land on one of the 20 win lines. As mentioned earlier, Wishmaker features six bonuses and seven modifiers. These features will be explained in further detail below:

The Magic Carpet bonus involves picking lamps and helping monkeys climb up magic carpets to receive a multiplier prize. With Sultan’s Jewels, pick from 12 chests to find three keys and get a bonus upgrade. Apart from this, Lucky Wishes, Genie's Wild Storm and The Golden Touch are bonuses featuring free spins and multipliers. Additionally, the Big Money Bonus potentially gives you up to 1000x your bet.

If you're eager to start playing an action-packed slot, then Genie Jackpots Wishmaker is the game for you. With low risks and high payouts, this medium volatility game is great for everyone to play. Furthermore, Blueprint Gaming ensures all its games feature high quality graphics, and Wishmaker is no different. What are you waiting for? Time to release the genie from his lamp!