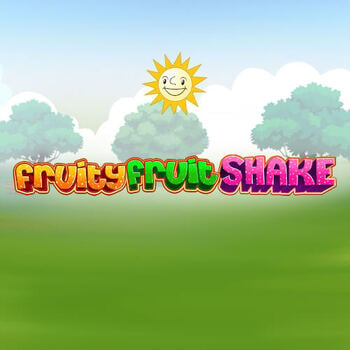 Even though playing slot machines with a traditional fruit theme is nothing new, Fruity Fruit Shake still has a unique story to tell. The game has 5x3 standard reel setup with 20 paylines. It has a Return to Player rate of 96%, where regular combinations could possibly pay up to 500x your stake.

Players have a total bet between 0.20 and 20 to gamble with per-line bets ranging from 0.01 to 1. Fruity Fruit Shake has a decent payout potential but doesn't offer massive jackpots found in other contemporary slots. If wilds end up making combinations on all lines, you might be paid up to 500x your original wager, with 25x being offered for each combination. Take a look at the Wild symbol first. The substitution role is the more prevalent one because it can be used in place of conventional symbols to create winning combinations. It may also appear alongside other wilds, and their own combination may pay up to 25x the bet  while regulars pay up to 20x. The Game's Logo is the other significant component. It can be found on the first or fifth reels. Reels can be spun again if the logo appears on the first one; during these spins, you try to land other symbols of this kind in the same first column. The fifth reel is copied over to the fourth reel to begin. If reel 1 contains more logos, the fourth clones the third, and so on, until all of the reels contain the identical collection of symbols. The same logo will be replaced by a wild symbol if it shows up on reel 5. The behavior is the same as it was when the logo appeared on the first reel after the re-spins. These symbols can never appear on two reels at once.

To try this traditional fruit theme slot, sign up at Genting Casino, playable on all mobile devices. Regardless of how the game appears to be played, always be aware of your bets and only place wagers that you feel comfortable placing.