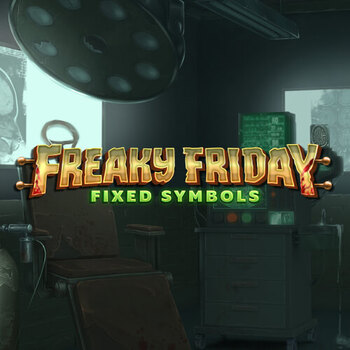 Dare to follow the freakish-looking scientist into his laboratory and conjure up ways to win by spinning the reels. Enable the Super Stake feature while the scientist reads from his book to upgrade reels with the Fixed Symbol feature. Set in a creepy laboratory made up of a 5-reel, 4-row, 20-payline grid, you might just walk away from this horror story with wins of up to 10,000x your stake. There are two ways to play the game affecting cost and opportunity. The regular mode begins with stakes from 20 to 100 per spin, while the other activates the Super Stake at double the cost and awards fixed symbols during free spins.

Landing a line of premium scientist symbols is worth 125x the bet, followed by electrified hats, face masks, brains, and pill bottles, worth 50x to 10x the bet for five-of-a-kind. Ten-A royals are the low pays, paying out 2.5-5x the stake for a line of five. The Book is the wild and substitutes any pay symbol to complete winning lines. As the scatter, landing 3, 4, or 5 book symbols awards 2.5x, 25x, or 125x the bet, plus 10 free spins. Before the free spins start, one pay symbol is randomly selected to be the expanding symbol which covers all positions on their reels. They do not have to be adjacent to each other to award wins. Landing three or more scatters awards ten free spins, and the expanding symbol remains during retriggers.

The Fixed Symbols feature becomes available when the Super Stake is active. When Golden Wild Scatter symbols land on reels 2, 3, or 4, that reel becomes a Fixed Symbol Reel. When an Expanding Symbol win can occur, the Golden Reel fills with the expansion symbol – even if one did not land on the Golden Reel. For example, if a 10-symbol lands only on reel 5, then reels 2, 3, and 5 will fill with expanded 10 symbols for a payout.

Register to Freaky Friday on Genting Casino, playable on all devices.  Set your spend limit before every game and stay in control.