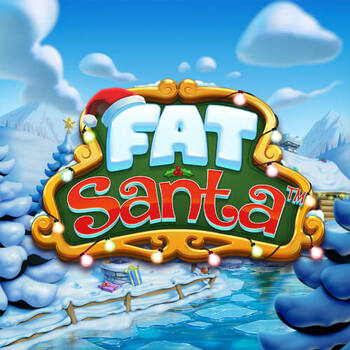 Produced by
Push Gaming
Fat Santa is a Push Gaming online slot with 5 reels, 5 rows, and 50 paylines. It's a Fat Rabbit sequel with features like random wilds and free spins. Fat Santa online slot is available on all devices, with bets ranging from 0.25 to 25 per spin. The RTP for the Fat Santa slot machine is 96.45%, and the volatility ranges from medium to high. 6,400 times your wager is the highest possible payout on the Fat Santa slot game.

The setting of the Fat Santa online slot is a cabin in Lapland with a Christmas theme. The graphics are cheery, vibrant, and colourful. Many holiday slots have overly sweet designs, but Push Gaming has struck a good balance with this one. The backdrop for the reels is made up of pine trees, snow-capped mountains, and a festively decorated cabin. While you spin, a cheery little backing track is playing. It is cheery without being overly sentimental, much like the imagery. In general, Fat Santa's design work is excellent.

There are four lower value club, diamond, heart, and spade bauble symbols on the reels. The gift box, the snowman, and Rudolph provide greater rewards. The most profitable standard symbol is Santa's elf. You can win 0.8, 4 or 20 times your stake if you land 3, 4, or 5 of these in a row. Santa, one of the game's two wild symbols, is offering the same sums. The second wild is the mince pie. When they are a part of a winning combination, they both replace all the common symbols.

A Santa symbol is present and can be used in place of other symbols to complete winning combinations. The Santa's Sleigh feature,  which appears at random while playing, is the next. The Christmas pies will be dropped in various locations as the sleigh flies over the reels. These serve as the wild. While the reels are spinning, the wilds will stay fixed in place. The Fat Santa free spins feature, which is triggered when one or more wild Christmas Pie symbols and the Santa symbol land, is the slot's highlight.

What is the maximum bet for Fat Santa?

The maximum bet for Fat Santa is 25.

What is the minimum bet for Fat Santa?

Can I play Fat Santa on mobile?

Yes, you can play Fat Santa on any Android or iOS device.

What is the RTP of Fat Santa?

What is the biggest potential win for Fat Santa?

The biggest potential win for Fat Santa is 6,400 times your stake.

At Genting Casino, you can play the Fat Santa slot. The website offers a large selection of slot machines, table games, and live casino games. To play any of these games on any device while relaxing in your home, go to Genting Casino online. In terms of holiday-themed slots, Fat Santa game is one of the best. Playing this slot machine is a lot of fun, and it has the potential to pay out seriously,you could win 6,400 times your initial bet.