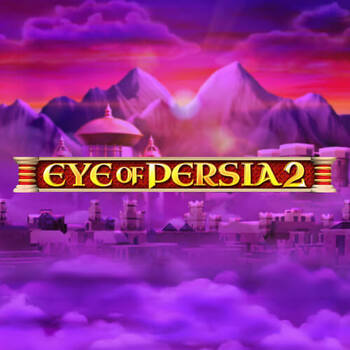 Produced by
Yggdrasil
Reflex Gaming's Eye of Persia 2 slot machine is a volatile 1001 Nights-inspired slot that features 5x3 reels and 20 paylines. The betting range in the Eye of Persia 2 online slot is 0.20 to 100 per spin. Princess Wilds, a Jewel Rush bonus, and free spins with stacked wilds and incredible random multipliers of up to 100x will be among the features included. It's a slot machine with a decent top payout of 35,217 times the stake and a 94% RTP.

About Eye of Persia 2

This Eye of Persia 2 slot online transports you to a mystical land with towering mountains and puffy white clouds strewn across the sky. We're somewhere in the Middle East, looking for a jewel called the Eye of Persia, which, according to the game's plot, can grant its owner unlimited wealth. A tall red and white tower stands to the left of the reels, and a large building stands to the right. The game's logo is placed in golden letters on top of the classic 5X3 grid.

Lower-paying symbols in the Eye of Persia 2 game include gemstones shaped like the four card suits: blue spades, green clubs, purple hearts, and red diamonds. Landing 3 on a payline pays 0.30X-0.60X, and landing 5 on a payline pays 1X-1.50X. Swords, gold coins, an eagle, and a golden palace are some of the most valuable symbols. Landing three on the same payline pays 2X-5X the bet, and landing five pays 10X-25X. A princess wearing a thin red veil over her mouth and a red gemstone on her forehead is the Wild Symbol. Filling a payline with the wild symbol pays 25X the bet. In addition, there is an eye-shaped Scatter Symbol.

When you play Eye of Persia 2 slot, the wild symbol is associated with the Princess Wilds Reel (princess). The feature can be turned on at any time, adding up to 100 wild symbols to the playing field. Fixed symbol respins were introduced by the Jewel Rush feature, which were triggered by the feature. This feature is activated when three or more scatter symbols appear on the playing field.

Eye of Persia 2 at Genting Casino

At Genting Casino, you can play Eye of Persia 2. The game Eye of Persia 2 was created by Reflex Gaming, a well-known studio. Eye of Persia 2 is a fun slot in which you'll go in search of a gem, and if you find it, you'll be rewarded handsomely. It gained popularity among gamblers due to its immersive engine and stunning graphics. The overall 35,217x potential is certainly above average, and the game's simplicity may appeal to some players.