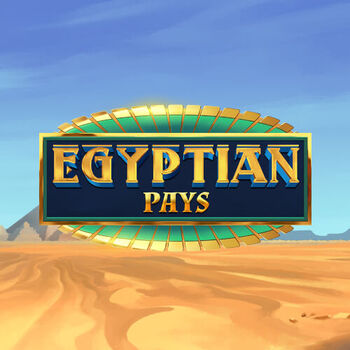 Travel once again in the land of the Nile by playing Egyptian Pays slot machine. The game happens on a 5x3 reel setup with 243 ways to win. It has a high variance and a Return to Player rate of 95.58%.

The minimum bet is 0.2 up to a maximum of 20. To win, you must land three to five identical symbols on neighboring reels that are aligned from the far left to the far right. The premium symbols, which include Scarab Statues and traditional Egyptian gods, range from 20x to 2x for five-of-a-kind on a payline. All four low-paying royals pay only 1x for 5 on a payline. Take advantage of a Sphinx wild symbol in the regular game. It is a conventional wild that will substitute for all other symbols to aid in forming combos. The wild can only appear on reels 2, 3, 4, and 5, not on the initial reel. The Spin Chance element is also included, and it is activated automatically when your bankroll falls below your current stake level. With your remaining funds, you can then make one more spin for a chance to win. To activate the Re-life round, you must land at least 3 scatters anywhere on the same spin. The beginning multiplier you receive is based on the number of scatters that activated the bonus. There are 11 levels in the multiplier. With each victory, you climb the multiplier ladder one level higher and receive three additional Re-Life spins. For each unsuccessful spin, you lose one life, but the multiplier level doesn't change. When you are down to your final life, you will receive a "Life Saver Spin." As a result, the middle and third reels will get a fully stacked wild, and the other reels will continue to spin normally which also enhances your possibility of extending the "unlimited" free spins feature.

Set your budget and register to Egyptian Pays on Genting Casino, playable on all mobile devices. Just make sure that you don’t play any more than you should in your quest to acquire rewards.