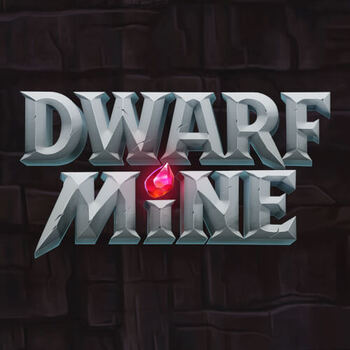 The hardest working miner is ready to dig up every reward you can get only at Dwarf Mine! Yggdrasil Gaming brings a new slot game centered on a dwarf miner with a steady hand. Dig deep into the mines for precious stones. Hard work will be rewarded with two types of free spins. A fitting game structure wherein a crank-style digging Perpetuum is used to spin reels and increase the game screen when you hit bonus symbols. Play on a variable game screen with five reels, four rows, and 1,024 ways to win in the game that can increase to seven rows and an astounding 16,807 ways respectively.

Game visuals will show a solid bedrock with remnants from a distant past of fossils, emptied bottles, skeletons, and an Irish hat. Making up the game background with the grid in the shape of a digging machine. Our fellow red-headed dwarf operates the machine in-game, setting the reels in motion and expanding the game window. Everything about mining is highly represented in Dwarf Mine even trickling down to the design of the symbols. The game stays at a medium to high variance with a solid RTP value of 96.80%.

In the early game, hitting scatter symbols will add anywhere from 4 to 7 rows to your game. Simultaneously, wins can grow in ascending numbers, and having an early expansion in-game will set the ways to win back to basics once the current spin is over. The fellow miner has two bonus features in his toolbox. Hitting three scatters anywhere on the grid will reward the player with 10 free spins and benefit from fully expanded reels. Collection Free Spins, on the other hand, are claimed after collecting enough same-color crystals. Claim the gems and play only at select casinos.