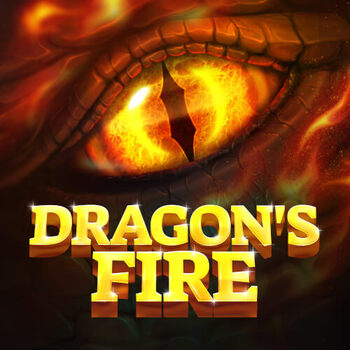 Produced by
Red Tiger
The Dragon’s Fire slot is played on 5 reels, 4 rows and 40 paylines that uses a fantasy mediaeval theme. You can play Dragon's Fire online slot at stake levels that range from 0.20 to 10 per spin. The Dragon’s Fire slot online RTP is 96.07% which is the market average. The max win is 10,336 x your total stake from a single spin. This is a high volatility slot which usually means stretches of non-winning spins and a chance at large value wins compared to lower volatility slots.

The Dragon's Fire slot game is a gorgeous game to look at. This game will be adored by any Lord of the Rings or Game of Thrones fan. However, if the Dragon's Fire game appeals to you, you'll also need to like slots with a high level of volatility. There are many randomly triggered bonus features included in it, as well as a free spins feature that has the potential to produce significant payouts.

The Dragon's Fire slot machine has a stunning design. It's one of the best-designed games you'll find, with a dragon fantasy theme. While you spin, an ominous, almost menacing soundtrack is playing. It works well with this theme.

The reels feature four colourful dragon eggs and four additional lucrative fully grown dragons. The Dragon's Eye is the best symbol, paying out 0.1, 0.8, 2, or 5 times your total bet when 2, 3, or 4 or 5 appear together on a payline.

The payouts for 3, 4, and 5 symbols are also available from the Wild. This can appear on all five reels and can replace all other symbols in the game. The animated dragon may come to life, allowing the Wild to land fully stacked.

The Dragon's Egg multiplier, which is located to the right of the reels, is the focus of this online slot machine. It begins to increase after a win and can go up to 50 times with subsequent wins in a row. After a spin that doesn't result in a win, the multiplier resets to zero.

Any winning spin may be followed by the dragon eye, which can multiply the Dragon's Egg multiplier up to 10 times.

Both the main game and the bonus round can feature the Fire Blasts feature, which is also a randomly activated feature. The dragon breathes fire when it appears, leaving behind wild reels or free spins in its wake.

What is the maximum bet for Dragon’s Fire?

The maximum bet for Dragon’s Fire is 10 which allows many players to aim for the max win.

What is the minimum bet for Dragon’s Fire?

The minimum bet for Dragon’s Fire is 0.20 which is great for penny slot fans.

Can I play Dragon’s Fire on mobile?

Yes, you can play Dragon’s Fire on an android or iOS device.

What is the RTP of Dragon’s Fire?

The RTP for Dragon’s Fire is 96.07% which is the industry average.

What is the biggest potential win for Dragon’s Fire?

The biggest potential win for Dragon’s Fire is 10,336 times your stake.

Dragon’s Fire is available at Genting Casino. The site contains a great variety of slots, table games and live casino games. Visit Genting Casino online to enjoy these games at the comfort of your own home using any device. Dragon’s Fire has great graphics which is great since the theme revolves around fantasy. If you are a fan of slots that offer large maximum possible wins and multipliers then this is for you.