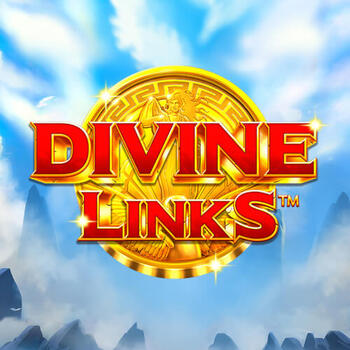 Divine Links derives its theme from ancient Greek mythology. The screen is set atop Mount Olympus shrouded in clouds. Divine Links comes with free spins and streak respins,Lux Reels, and Lucksome Locks features. Climb the summit by staking a bet between 0.20 and 100.00 credits per spin.  Winning combinations are formed by landing 3 or more matching symbols or wilds from left to right across a payline, starting from reel 1.

Played out in a five-reel, 20-payline grid, the symbols include the lower value A-J royals, a green apple, an oyster shell and pearl and Aphrodite. The goddess herself holds the highest value awarding payout of up to 50x your total bet per payline. Land 6 or more gold coins to trigger the Lux Reels feature where a new and expanded reel appears made up of coins, blanks and heart symbols. Respins are awarded when the triggering coins lock in place. If a heart symbol lands, it can do one of three things - transform into a new coin, turn into a rose scatter to activate free spins, or become a 2x multiplier. When respins reach zero, all collected coins are added together and the equivalent cash value is awarded. Players have the option to choose different volatility levels during free spins. If you choose low volatility, for example, spins may have guaranteed wins but smaller rewards, while high volatility spins can have potentially bigger prizes but rarer payouts. Landing 5 coin scatters on the same spin allows the player to pay to activate the Lucksome Locks feature. Players get one spin where the reels are made up solely of blanks and scatters. Land a sixth coin to launch the Lux Reels feature. Each spin with the Lucksome Locks active costs 2x your total stake. Divine Links is playable on mobiles, tablets and computers.

Begin your ascent where the ancient gods await by registering to Divine Links on Genting Casino. If you bet more to make up for your losses, you are likely to lose more money. Set your limit before gambling to stay in control.