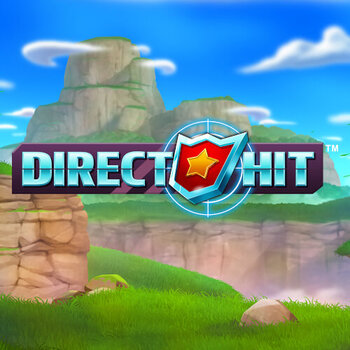 If you have ever played First Person Shooter games in the last few years, you would totally see the resemblance of Direct Hit to a certain worldwide phenomenal game. Yes, the visuals are quite similar and there is a certain charm to it. Being a fan of that kind of cartoonish style would certainly help, but not that you need any to enjoy Direct Hit. Its exciting features alone will sure to keep you entertained. Direct Hit is played on a very distinct 7 x 7 grid with 5 paylines and the full range of bet starts with a minimum of 0.20 upto a maximum 100.

Wins are made when 5 or more of the same symbols are formed in a cluster that Cascades, replacing the winning symbols with a new set of symbols and will go on until there are no more winning combinations. The Wild Symbol represented by a 'W' logo can substitute for any symbols in the game with the exception of the Red and Blue Gems. Direct Hit also Features a Money Zone, a 2 x 2 grid that moves around once before making a spin and after a Cascading win and will collect all Gems that land on it. Cascading wins will increase the size of the Money Zone upto 6 x 6. There are 3 Gem Counters on the Money Zone it will fill up by 1 for each Gem collected. Once filled up the game will award you with Free Spins depending on the color of the most Gem collected. Note that you will need to collect 3 Gems in one spin, which means you need several Cascading wins to pull it off. If 2 or more of the Gems are Blue then you'll activate the Super Spin and any symbol that is in the Money Zone will get Stacked for a random amount. Any symbol that has a Stack of 5 or more guarantees a win.