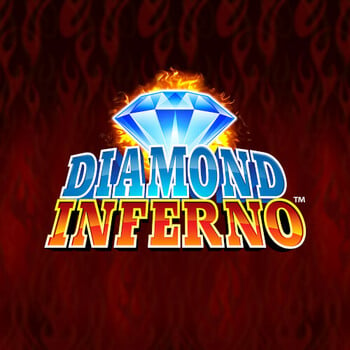 Produced by
MicroGaming
Microgaming presents this awesome slot developed by Triple Edge Studios. Diamond Inferno Slot is one for the die-hard slot fans, those who love their lucky number sevens, dollar signs, stars and red dice symbols. The game is a nod to Vegas-style slots of times gone by, but players shouldn't get too comfortable — this is a quintessential slot game with a very fiery twist. Step into a Diamond Inferno

The theme of the game is fire, and lots of it. Flames envelope the reels during play and together the expanding reels, multiplier trail, and a maximum win of more than 11,000x the initial stake will keep any player on the edge of his or her seat. Play Diamond Inferno slot to boost winning potential like in no other game.

Players should know that any initial stake is potentially a big win. Bets can start from 20p and can be a maximum of to £20. The game developers built medium volatility into the game so when playing Diamond Inferno slot online, there is an average of 32% of frequency hits. Players have the best of both worlds — the satisfaction of winning and a good pay-out.

Classic symbols don't mean a simple game. Even though the symbols in the game are traditional, the dancing flames around the playing area on the screen add to the thrill of playing. At the same time, the infamous J — A form the lower-paying quartet. If they play Diamond Inferno slot online, players have 20 ways to win by landing 3 matching symbols in a line.

A fantastic feature of this game is that respins work to amplify players' winning potential. The initial playing grid is 5x3 but only once a player hits a win on this grid does the fun start. Hitting a win unlocks a special 4th row which expands the grid size to 5x4 and includes 30 paylines. This amazing win then triggers a respin. But it doesn't end there…

When players hit another combination on the respin after unlocking the 4th row, a new 5th row is revealed, which means the grid size increases to 5x5, with 40 paylines and an additional respin. Players can even hit a further, third combination which unlocks the final 5x6 full grid with as many as 50 paylines! There is no end to the ways in which players can win big.

Multiplier Trail is another feature of this slot. To gain access to this intriguing feature, players need to play hard, survive the blaze and unlock the full grid. Once the 5x6 grid is unlocked, players need to hit a win which will activate the Multiplier Trail. This trail increases from 2x to 3x, to 5x and hits its maximum at 10x.

Seemingly simple enough with its basic 5x3 reel slot, players should not be deceived and think that this is a basic game. Far from it - with the great features, such as bonuses and multipliers, that this game has, the gorgeous graphics and good pay-out potential Diamond Inferno offers all its players, it is definitely worth a spin, or two, or three.