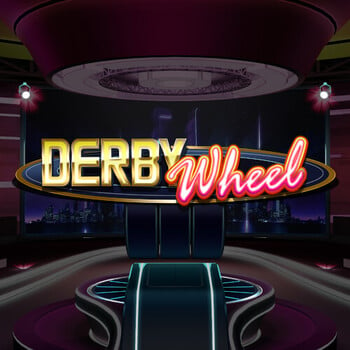 Produced by
Play N Go
Derby Wheel slot machine is powered by Play'n GO software and has 3 reels, 3 rows, and 5 pay lines inspired by horse races and game shows. You can choose between a minimum bet of 0.05 and a maximum bet of 100 per spin when playing the Derby Wheel online slot. The RTP for the Derby Wheel game is 96.20%, which is higher than the industry average. Derby Wheel slot game has a high volatility and you can win up to 2,240x your stake.

The design of the Derby Wheel slot online is based on a futuristic derby race, in which we travel to a location where this fast-paced race takes place. A turquoise light can be seen in the background of the reels, illuminating this futuristic venue where the derby will take place, where silhouettes of spectators can be seen. This Derby Wheel slot machine is available to play on both mobile and desktop devices. A winning combination is formed by landing three of the same symbol type on adjacent reels beginning at the far left.

Moving on to the paytable, the Derby Wheel online slot has five regular pay symbols in ascending order: lemons, cherries, plums, BARs, and 7s. Their values range from one to five times the stake. There are no wilds to replace regular pay symbols when it comes to special symbols, but there are scatters to activate bonus features.

There are two bonus rounds in Derby Wheel, both of which are triggered in the same way. The Fortune Wheel bonus game is triggered when three scatter symbols appear in the base game. Because this wheel is divided into two sections – Horse Racing and Big Wheel – when it stops spinning, one of these bonus rounds is awarded at random.

When three scatters appear on the screen, the Big Wheel bonus round is triggered. Players can win multipliers by spinning the Big Wheel once. The Horse Racing feature can also be enabled here.

At Genting Casino, you can play Derby Wheel. When you play the Derby Wheel slot, you will be transported to a game show with its incredible design and artwork. Derby Wheel can be played for as little as 0.05 per spin, which is a good thing. Play'n Go is a prolific and capable developer, and the Derby Wheel online slot demonstrates this. The game's flashy 3D production adds to its allure, while the Big Wheel and Horse Racing perks add to the excitement.