Play Curse of the Mummies 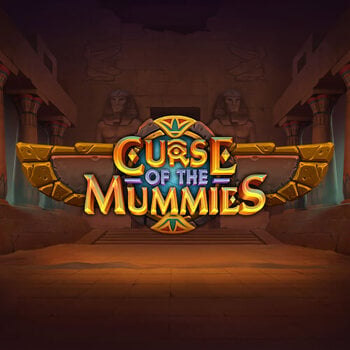 About Curse of the Mummies

The Curse of the Mummies slot online features stunning visuals that perfectly capture the atmosphere. The base game is set in an underground catacomb with a high ceiling and thick pillars with Egyptian patterns. With Anubis statues on either side and lit braziers, the reels are set inside what appears to be a stone shrine. The stone blocks are also carved with hieroglyphs, which is always a plus in Egyptian-themed games. The graphics are stunning and can create a truly immersive gaming experience. They're also accompanied by an incredible soundtrack that combines traditional melodies with a more sophisticated style.

Different Egyptian-themed icons, such as an ankh, a lotus, a scorpion, and a cobra, represent low-paying symbols. The high-paying group of symbols, which includes green, blue, purple, and red mummy symbols, is next, with the highest-value symbol worth 8x the stake for a fully covered payline. There are standard scatter symbols and super scatter symbols, which are represented by green and red gem-encrusted doorways, respectively. Last but not least, the golden scarab is a wild symbol that can substitute for any of the other symbols in the Curse of the Mummies slot game.

Curse of the Mummies Features

Curse of the Mummies at Genting Casino