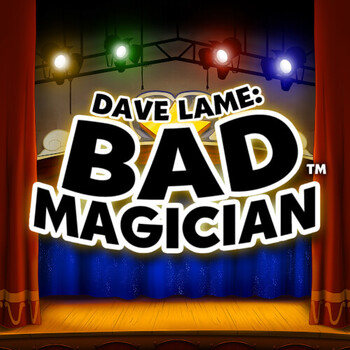 Dave Lame Bad Magician is a 5-reel slot with 20 winning lines. These winning lines are formed from the leftmost reel towards the right. The maximum reward from a single free spin stands at 2500x the stake.

RTP rate for this slot is 96% which is considered average with a high volatility rate. The minimum bet per spin is 0.20 coins while the maximum bet is 50 coins suitable for low and high rollers.

Wilds play a major role in completing winning lines in the grid. If you land a wild anywhere on the reel, it transforms into a symbol that will complete a line if possible. More wilds mean more rewards.

Free spins are activated by landing a specific number of scatter symbols. The rewarded free spins also depend on how many symbols you have landed in that round. Furthermore, these free spins can be retriggered during a bonus round.

The game starts by first choosing a suitable stake for the round using the icon on the bottom left of the screen. Players can either choose the auto-spin feature or prefer to spin the wheels by themselves.

There are different symbols on the main screen and each has its own rewards when triggered. Some of these symbols include a saw, a rabbit in a hut, the 'Bonus' symbol and the lucky 'Bad Magician' icon.

What is the maximum bet for Dave Lame Bad Magician?

The maximum bet amount for each spin is 50 coins.

What is the minimum bet for Dave Lame Bad Magician?

The minimum bet amount for each spin is 0.20 coins.

Can I play Dave Lame Bad Magician on mobile?

Dave Lame Bad Magician slot is available for all devices.

What is the RTP of Dave Lame Bad Magician?

RTP rate for this slot is 96% which is the average.

What is the biggest potential win for Dave Lame Bad Magician?

The maximum win from a single spin is 2500x the stake.

NYX, otherwise known as NextGen Gaming, is one of the biggest online casino game and software providers. The company is based in the UK and has partnered with the most popular casinos such as Betway.