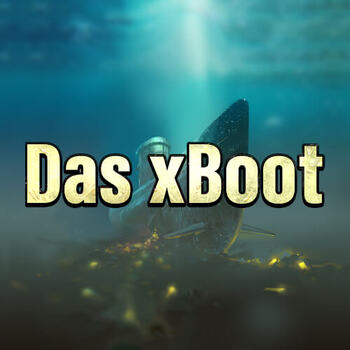 Das xBoot is a complex, highly volatile slot jam-packed with an arsenal of explosive extras. Playable on all devices with a bet from 0.20 to per spin, the game uses a 6-reel panel arranged in a 2-3-4-4-3-2 formation. There are 576 ways to win with the potential to swell to 75,712 under the right conditions.

Coming from the rear are the low pay 10-A card royals, while five crew members are the premium symbols consisting of chefs, radio guys, engineers, periscope operators, and captains. The most valuable icon is the Kapitanleutnant, worth 20x the stake for a six of a kind winning combination.

The Das xBoot slot game is packed from bow to stern with a complex set of add-ons such as XNudge Wilds, XBomb Wild Multipliers, Silent Hunter Free Spins and the Wolf Pack Free Spins. It would be wise to learn the rules of the game before engaging.  XNudge wild symbols move up or down reels until they fill all rows, and a multiplier increases by 1x for each step. XWays symbols split to reveal two or three other symbols, increasing the number of ways from a basic 572 to maximum of 75,712. XBomb wilds explode across the Das xBoot online slot, removing all non-winning symbols. New symbols plunge down reels to form further wins. Sonar displays award eight Silent Hunter free spins, where the middle reels grow to eight rows high. These Periscope wild reels scan for enemy ships and unlock Torpedo Launch multipliers. Land four scatters to enter the Wolf Pack free spins feature, where wild multipliers and xWays symbols can lead to massive wins of 55,200x the bet.

Finally, the Nolimit Bonus feature is a buy option where players can purchase the Silent Hunter Free Spins or the Wolf Pack Spins at the cost of 75x or 350x the stake respectively.

Batten down the hatches when you register to Das XBoot on Genting Casino where each spin is a thrill with all those potential wilds, multipliers and additional ways in play. Know your limits and be clear about them before you start gambling.