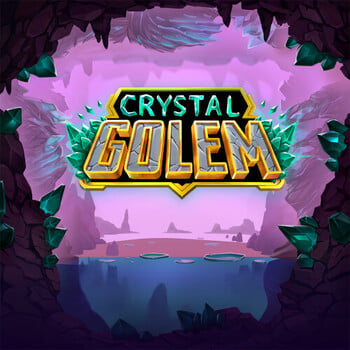 Have you ever had a golem as a dream partner? With its bright look that showcases shimmering stones and exotic flora, imagine having it serve you while you play Crystal Golem. Crystal Golem is an underworld filled with crystals and crystalline rock formations that becomes a deeper blue throughout the bonus rounds. The game has a definite Push-like look if we had to compare it to anything; high definition, wacky characters and objects, which makes sense considering that Print Studios features former Push members on the team. A whirling ambient song on the soundtrack that has a sense of the 1980s and would fit well with a science fiction movie from the time is entertaining as well. When at least three matching symbols fall adjacently from the leftmost side of the 5-reel, 3-row gaming grid with 20 fixed paylines, Crystal Golem coughs up winnings. Buying free spins increases the Return to Player value to 96.99%, while naturally triggering the bonus game increases it to 96.36%.

There are nine normal pay symbols to use in winning combinations, with four low and five high payouts. The game may be wagered from 20 to 100 each spin. Although their forms don't quite like card royals, the lows are known as Jack, Queen, King, and Ace. Then a number of cave creatures such as stone snakes, crystal bats, water mushrooms, gold mushrooms, and fire mushrooms appear. You may get a payout of 2.5 to 20 times your wager when premium symbols appear on an entire win line. The wild symbol features golems, and getting five of these on a payline yields the highest payout of 50 times the initial wager. Additionally, while gaining a helpful boost during free spins, golem wilds may finish a win by replacing any pay symbols.

Take a trip back in time as you sign up for Crystal Golem at Genting Casino, which is accessible from any mobile device.