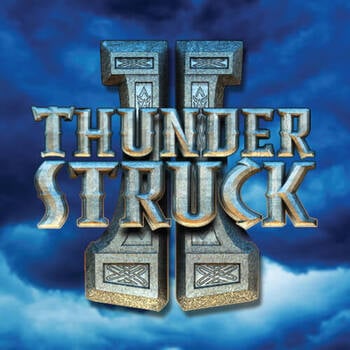 Produced by
MicroGaming
Microgaming brings you the Thunderstruck II online slot with 5 reels and 3 rows complete with bonus features such as Wildstorms and Great Hall of Spins to help you reach that max win of up to x8100 of your bet. A godly theme full of Norse deities will keep you entertained when you play Thunderstruck II slot online. Play the Thunderstruck II slot machine on a grid containing 5 reels and 3 rows with 243 available paylines. The game has a Low volatility with a good-sized RTP of 96.65%. Betting in the Thunderstruck II game starts at 0.30 and can go as high as 15. Your bet can go as high as x8100 your stake. Despite having a low volatility, there are still some good prizes to be won in the game as long as you are lucky enough to land the right symbols and trigger some continuous wins when you spon the reels.

Game developer Microgaming is known for producing good quality games with high playability and satisfying returns. And the Thunderstruck II slot game continues that trend. Featuring well-animated visuals and effects, the game shows-off the Norse mythology theme really well with exquisite designs of the symbols and the characters in the game. The triggering bonus features also come with exciting sounds and music that works with the overall theme.

The bonus features of the Thunderstruck II slot all borrow from the theme of the game. Being named Wildstorm and Great Hall of Spins for example.

The thunder-god Thor leaps into the reels to shock the game and turn up to 5 reels into Wilds. You can instantly get winning combinations and increase your prizes in a short amount of time.

This is the Free Spins feature and is triggered when you land 3 or more of the Mjolnir Scatter symbols. You get different progressive rewards in a sequence as you continue to trigger the bonus feature.

Play Thunderstruck II slot online and start the game easily with these simple steps. First you would want to check the main screen and adjust the different game options according to your preferences. Input your bet between 0.30 and 15 and start the game by tapping the ‘Spin’ button. Wins are made by matching the symbols on the screen from left to right. Higher cash prizes are paid by winning combinations with the better paying symbols. Card royals from 9 - A are the standard symbols in the game. Higher-value symbols include the Viking Ship, Asgard, Valkyrie, Loki, Odin, and Thor. The bonus symbols of the Wild and Scatter symbols can also appear during the game to award you with multipliers and various bonuses to increase your winnings and extend your gaming session through the free spins bonus round.

You can view the details of the different bonus features in the game as well as the paytable via the options buttons on the main screen. There are also displays that you can check that indicate the value of the coins, your bet, and the running total of your wins. You may play the Thunderstruck II slot game on your computer or any of your mobile devices for a more convenient gaming experience.

What is the maximum bet for Thunderstruck II?

The maximum bet for the Thunderstruck II slot is £15 (GBP).

What is the minimum bet for Thunderstruck II?

A minimum bet of 0.30£(GBP) is allowed in the Thunderstruck II game.

Can I play Thunderstruck II on mobile?

You can play Thunderstruck II on mobile devices.

What is the RTP of Thunderstruck II?

What is the biggest potential win for Thunderstruck II?

A maximum win of x8100 of your stake is available in the Thunderstruck II slot game.

Since creating the first true casino software for the web in 1994, Microgaming has been regarded as a pioneer in the industry of online slots. Microgaming is the owner of one of the largest and most profitable progressive jackpot networks in the online slots industry. Microgaming's progressive jackpot network has paid out over £1 billion in rewards to players all over the world throughout the years. Every day, over 7000 wins are awarded over the numerous progressive networks. Microgaming offers over a dozen jackpot networks, including Wowpot, Major Millions, and Mega Moolah. Microgaming is known for its broad portfolio of slots, which are often built in conjunction with small development teams. Examples of popular slots that Microgaming has created include; Book Of Oz, Immortal Romance, and Lara Croft: Temples and Tombs.

Play Thunderstruck II slot online only at Genting Casino. Discover the potential rewards brought by the Norse gods and enjoy a fun and exciting slot game with great visuals and possible big wins. The website offers some of the best slots around including table games and live casino games. Enjoy a wide variety of options all at the tip of your fingers when you visit Genting Casino.