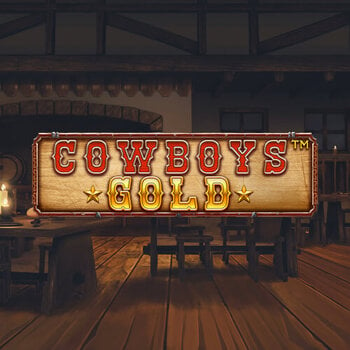 Legends tell us that cowboys are heroes back then. Do you wish to carry on this legacy? If so, now is the time to bring out your cowboy attribute as you play Cowboys Gold!

This game is a 5-reel by 3-row slot game with 10 paylines. To start, place your bet between 0.10 and 50 then click the spin button to begin. On a wooden reel, you can see the playing card symbol (10-A) which are the game’s lower-paying symbols together with the high paying symbols which are the cowboy symbols, spurs, whiskey bottles, and guns. There are also the sheriff's badge symbols that represent the wild symbol which can be used to substitute any symbol. In addition, there are the golden horseshoes which are the best symbols since they pay out on two of a kind up to 75x the bet when a line of five appears.

To increase the excitement, free spins feature and money collect feature are added to this game. The free spin feature is triggered by landing 3 or more bonus scatter symbols on the middle three reels, then 10 free spins will be rewarded. These free spins can be retriggered three more times by landing another three scatter symbols on the middle three reels. Next is the money collect feature which is triggered by landing the cowboy symbol on reels. Some of these symbols could have miniatures coin overlay with values ranging from 1x to 100x the bet. If these coins land on the same spin as the special renegade symbol, you'll receive payment for each of the coin values displayed on the screen.

Get ready to ride your horse as you sign up to Cowboys Gold at Genting Casino, which is accessible from any mobile device. Just be mindful and play within your gaming budget.