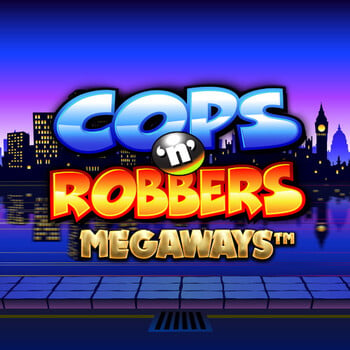 Are you a cop in real life or have you ever fantasized about apprehending robbers? Cops and Robbers Megaways is the game for you. It is an online slot machine created by Inspired Gaming that has up to 117,649 winning lines. Expanding wilds, reel modifiers, a board game bonus, and other features are included. This very volatile slot machine has a Return to Player rate of 95.19% and a 12,500x maximum prize. Opening the stake menu offers selections from 0.20 to 20 each spin, which should satisfy everyone, even the biggest rollers. This time around, the level of volatility is expected to increase, rising from medium to medium/high. Depending on the bonus choice, the return value varies, cycling between 95.19% to 95.50%.

The logo symbol is the sole symbol that pays for a two-of-a-kind hit in the base game, which follows typical Megaways rules of three matching symbols from the leftmost reel triggering a win. 50 times your stake is paid out if six logos line up. The premium symbols are, from top to bottom, a cop symbol, a bag of money, a bundle of money, and a police vehicle. It's interesting to notice that the woman and the judge symbols have been removed. The low payouts are made up of symbols from the 10-A card deck. A bulldog wild symbol that appears on the bonus reel may be used to replace all other symbols except for the bonus scatter. Every win in the basic game or bonus game activates the cascade function, which releases winning combos from the reels. As a result, repeated winning sequences may be created by adding new or existing symbols to the top of the screen.

Keep an eye to the authorities and thieves as you sign up for Cops and Robbers Megaways at Genting Casino. And would also like to remind you to keep track of your stakes and to only place bets that you feel comfortable with.