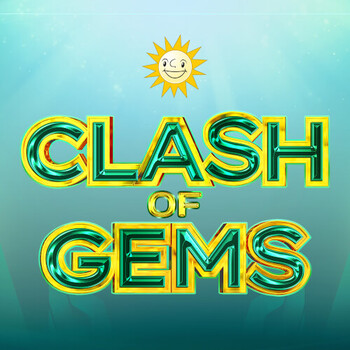 Clash of Gems takes you to a valley of crystals and gems. Set in a 5x4 grid, there are 10 active paylines. The major features include multiplier and expanding wilds and Gempot symbols that can trigger the game’s Mini, Major, and Maxi Jackpots. Bets range from 0.10 to 10 per spin. The maximum potential win is 5,000x the stake after one spin.

Paying symbols include the low paying card suits which award 0.4x, 1x and 2x multipliers. The mid value symbols are the Red, Blue and Yellow gems giving a payout of 1x, 4x and 8x the bet. The Seven symbol has the highest worth awarding 5x 10x and 20x the bet. Wild symbols drop anywhere on the reels and substitute for missing symbols. Wilds transform all symbols below them, turning them into extra wilds in the expanding wild feature. If they appear at the bottom, these symbols expand either left or right to help create winning lines. Some wilds can expand downwards, while others on adjacent reels at the bottom expand sideways. This scenario can end up with overlapping wilds, earning those positions with a 2x multiplier. Look out for the Gempot symbols which open access to three jackpots. These symbols need to land on the reels a certain number of times to bag a prize. Three Gempot symbols award the Mini Jackpot which is 100x the stake. Four Gempot symbols award the Major variant at 500x the stake. Claim the Maxi Jackpot of 5,000x the stake when 5 Gempot symbols appear in view. These symbols need to land left to right, on adjacent reels to form a win.

This game is playable on all mobile devices. Register to Clash of Gems on Genting Casino to play. Set your maximum spend, a loss limit, and even a single win limit. Setting yourself a single win limit can mean you walk away while the going is good. Gamble responsibly.