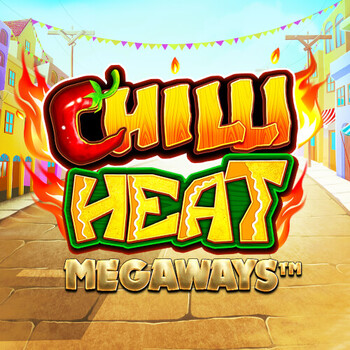 Produced by
Pragmatic
Join a Mexican street party with Chilli Heat Megaways slot, a highly volatile release from the developers at Pragmatic Play. This game is a follow-up to the highly popular Chilli Heat video slot by the same provider. However, this updated version packs up more features than the original. They include respins, tumbling wins and Megaways that can rise up to 200,704.

Players can play Chilli Heat Megaways on a machine that contains 6 reels. The number of symbols landing on each reel varies with each spin hence affecting the number of paylines. If all reels are full of symbols, up to 200,704 paylines will be active. To create a winning combination, three identical symbols must land on adjacent reels, right from reel 1.

Bet limits of Chilli Heat Megaways slot online start at 0.20 coins and end at 100 coins per spin. Additionally, the RTP is 96.5%, a figure which is somewhat above the average. Apart from that, the game comes with high volatility, hence players should play it with utmost caution. The most that can be won is 5,000x the total bet.

Players will find a Mexican party theme when they play Chilli Heat Megaways slot. The reels contain royal symbols alongside Tabasco sauce, glasses of tequila, a Chihuahua dog and a Mariachi dancer. The most valuable symbol is the Mariachi dancer which pays 10x the bet for six on a payline. There is also a wild symbol that is represented by the game's logo.

The game comes with several special features including the Tumble feature. It is activated when a win is created. As a result, a tumble follows where successful symbols explode and disappear from the screen and another set of symbols appear to replace them. The game then awards a new payout. The feature continues as long as new winning combinations are created.

Another feature is the respin feature which triggers when at least 6 money symbols land anywhere on the grid. When this happens, players receive 3 respins that are playable on a new grid. If another money symbol lands, it locks in place and the feature restarts. Furthermore, the symbols which participated in the triggering spin will also be active when the respins are running.

Players should also watch out keenly for symbols that appear only on the spinning top reel. These symbols award modifiers that can ramp up the action during the respins feature. When all respins are used up, the values of the Money Symbols are cumulated and summed up together. The amount is then awarded to the player in the form of a cash prize.

Chilli Heat Megaways video slot is basically a ramped-up version of the original game. There are more winning ways brought about by the Megaways engine. Apart from that, the respin feature now carries more potential thanks to the addition of a wide range of modifiers. Players should watch out though as the volatility of this version is way higher than the original.