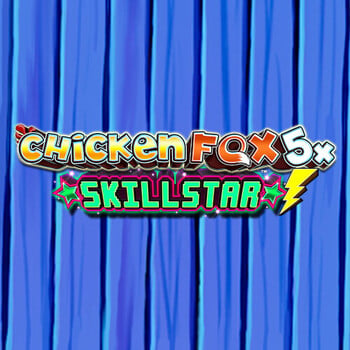 Enjoy the farm life and snatch some chicken with ChickenFox5x Skillstar by Lightning Box Games! Played on a 5-reel 3 row set up with 20 pay lines. The lowest playing symbols being a “10” symbol, a “J” symbol, and a “Q” symbol, all three having the same multipliers. Followed by a “K” symbol and an “A” symbol, both of which have the same multipliers. Then there are the barn symbols which consist of the “Goat” symbol, followed by a “Pig” symbol, then a “Tractor” symbol. The Chicken symbols have the same multipliers, the symbols are the following; a “Yellow Chick” symbol, a “White Chick” symbol, a “Hen” symbol, and finally a “Rooster” symbol. The game features 4 extra symbols, the “WILD Lady” Symbol, “BONUS” symbol, “WILD fox” symbol, and finally a “White Egg” symbol. The “WILD Lady” symbol only appears in the base game, the “WILD Lady” symbol substitutes for all symbols except the “BONUS” symbol. The “BONUS” symbol or the scatter symbol appears only in the base games, this symbol triggers the Free games – chicken catch bonus. 3 scatter symbols triggers 8 free games, 4 scatter symbols triggers 15 free games, and 5 scatter symbols triggers 30 free games. Only during the free games will the “WILD Fox” symbol appear. There are two “WILD Fox” symbols; “Fox” symbol and a “Fox 5x” symbol. These two substitutes for all chickens during the free games. Take note that these symbols cannot substitute for each other. The Foxes can catch chickens or white eggs during the free game bonus, when a fox catches a chicken, it adds to their total prize tag. When a Fox catches a white egg, you will be awarded up to 5 free games. Any Fox or Fox 5x without a chicken or egg awards 1 and 5 free games respectively. Free games cannot be retriggered. Bets ranges from 0.25 up to 325.00

Play ChickenFox5x Skillstar on Genting Casino available on any mobile device. Remember that not everyday you will be able to snatch a winner, winner chicken dinner! Set a budget and take time for a breather.