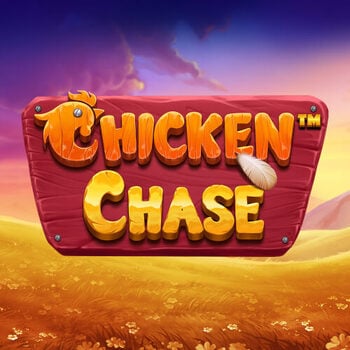 Produced by
Pragmatic
Chicken Chase Slot Machine is a radically different release in most ways, with incredibly basic gameplay, little volatility, and a maximum win of only 210x your bet. Keeping afloat isn't an issue, and the Spin and Hold feature in the base game awards a tonne of free respins. Getting a free respin with reels every time you don't land a 5-oak win is a unique twist. The chicken noise is kept to a minimum, which is welcomed, and the upbeat soundtrack will transport you to a carefree countryside adventure with chicken pluck awards of up to 150x at best.

There are ten fixed paylines that run across the game field of Chicken Chase online slot for landing winning combos of three or more of a kind. Bars, strawberries, broccoli, aubergines, and peppers are on the lower end of the paytable, offering 5-10 times the stake for a five-of-a-kind hit. The three premium symbols are hens, turkeys, and roosters, which are worth 30-80x the bet for five of a kind. The blue wolf wild symbol is even more valuable, earning 200x for a five-reel win, or landing wilds in any reel to replace regular paying symbols. The RTP for Chicken Chase Slot Online is 96.48% with low volatility. You can play Chicken Chase slots between 0.10 to 50.

Wooden trims are used to make the reels, which are placed in the centre of the field. A mountain range can be seen in the distance, and hay bales and windmills can be seen on the right side of the image, while a barn and a wooden fence can be seen on the left. The contrast between the sunset and the night sky creates an almost dreamlike aesthetic. While you spin the reels, you'll be charmed by a cheerful and upbeat soundtrack.

This one is a little unique. When you hit spin and don't get a five-of-a-kind win, you get a respin. After the respin, or if a 5 of a kind winning combination lands on the first spin, the game pays. Players have two options between the initial spin and the respin. For starters, you can choose which reels you want to keep for the respin. Alternatively, let the game choose the held reels at random. In either instance, respins are free, and players can deselect any reels the game chooses for them.

An excellent site to play Chicken Chase is at Genting Casino. Genting Casino offers a great selection of table games, live casino games and slots. The Chicken Chase Game is a great game for new players because of the low volatility which usually rewards small wins but with great frequency that can hold any player's interest in hitting more wins. The maximum bonus does not sound too appealing for high-rollers but the maximum bet does.