Play Champion of the Underworld 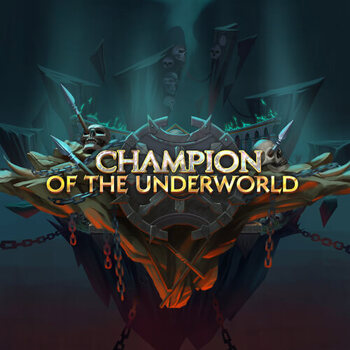 Produced by
Yggdrasil
The following game in the "Underworld" series is called Champion of the Underworld slot by Yggdrasil Gaming. As you spin the underground arena machine in Champion of the Underworld game and collect high-paying symbols, some of them will change into Wilds, boosting your wins. The reward will be even more magnificent because of the Gigablox mechanic, and every Wild symbol—including those given by Wild Fight—will intensify the bonus spins feature. Maximum wins from all of these are 10,000 times your initial wager. Play Champion of the Underworld for 0.20 to 100 per spin.

About Champion of the Underworld

The Champion of the Underworld slot game features 4,096 paylines over 6 reels and 4 rows. Three or more matching symbols must appear from left to right, beginning on reel 1, to be the winner.

The stakes each spin vary from 0.20 to 100, which is standard for Yggdrasil slots. By clicking the coin icon below the reels, you may effortlessly change your total bet to suit all bankrolls. There are 17 different bet values that you can pick from.

The top prize is 10,000 times your bet. By no means is this the highest, but it's also not the lowest either. Due to the multipliers that are active during the bonus spins feature, you will have the best chance of winning the grand prize.

The underworld and the fantasy monsters engaged in combat in the afterlife are central to the Champion of the Underworld's concept.

The underground arena where the reels are set has a gladiatorial feel to it. This has an ominous atmosphere because of the tight and frightening soundtrack that goes along with it. As you spin the reels, dark rock music is played to heighten the tension. It all gels together quite beautifully.

The lower-paying symbols on the reels are represented by the card suits of clubs, diamonds, spades, and hearts. The higher paying ones include a horse, a woman with four eyes, a woman who resembles a medusa, and a bull. The red bull is the most lucrative symbol, offering 0.25, 0.5, 1 or 2 times your wager for combinations of 3, 4, 5, or 6.

The golden skull that serves as the game's wild symbol replaces all other ordinary symbols.

Champion of the Underworld Features

Although there are five additional features in Champion of the Underworld slot online, just one is the major focus of the action. That is the bonus spins feature, which in some regions also offers multipliers and the opportunity to risk for further bonus spins.

The Gigablox feature uses larger symbols on the reels that function normally but are arranged in a 22 to 44 pattern. In this game, Gigablox can also appear as a scatter for bonus spins.

Hades can challenge all high symbols on any spin in the standard game, and if he prevails, turn them into Wild symbols. Additionally, Gigablozx symbols have the potential to turn into Wilds.

Every time a spin is made during the bonus spins feature, Hades engages in combat, and every time a symbol turns wild, the Multiplier counter rises.

To activate the bonus spins bonus and receive at least 5 spins, you must land 5 or more Scatters in the base game. You will receive one extra bonus spin for each bonus spin Scatter that lands throughout the bonus round.

As was already mentioned, this bonus round has a multiplier counter that advances by 1 each time Hades triumphs in a battle. The multiplier increases the more times you transform into Wilds.

If you haven't already used up your initial maximum of 20 bonus spins when the bonus spins feature is activated, you can wager for further bonus spins. Simply pick a sword, and if the tip is golden, you win.

Champion of the Underworld at Genting Casino