Play Cat Wilde and the Pyramids of Dead 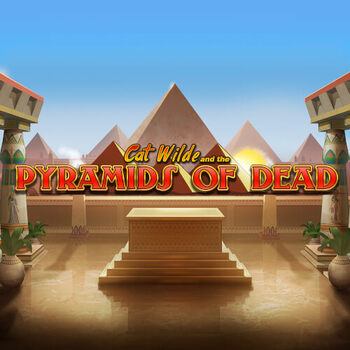 Set in the tombs of Ancient Egypt, this game will take you on a Wilde adventure for lost treasures and undiscovered secrets. You're in for a ride with the intrepid adventurer Cat Wilde, you can continue the story and even spot familiar symbols from their previous installments.

This game is played on a 5-reel, 3-row game panel. There are fixed 10 paylines for scoring winning combos across. Form a winning combination by hitting identical symbols on the first reel, starting from the left all the way to the right. This requires at least three low pays or two high pays to do. Low pay symbols are made up of 10-A card royals, which are worth 6-8 times the stake for a five a kind hit, increasing to 40-1,000x the bet for five of the higher paying scarab, Anubis, Pharaoh, or Cat symbols.

However, this isn’t the only way to win. Trigger one of the three bonus games by landing at least 3 Pyramid Wild Scatters. Trigger the Instant Prize feature and each visible scatter will display a value in coins that can be worth anything up to 500x the bet, which is then summed up and applied. Trigger the Jackpot Round and get the chance to win any of the following prizes: Khufu, Tiye, Tutankhamun, and Mereneith, worth 20x, 100x, 250x, and 1,000x the bet, respectively. Trigger Free Spins and get 8 free spins with one initial pay symbol randomly selected to be a special expanding symbol that can expand to cover all positions on its reel and pays all lines. You also have the option of gambling your winnings through playing with cards. However, be careful with your choices since one move can mean forfeiting the entire win.

This game is available to play on any device and players get a stake range of 10 to 100. You can try Cat Wilde and the Pyramids of Dead at Genting Casino. Just make sure that you don’t play any more than you should in your quest to unlock rewards.