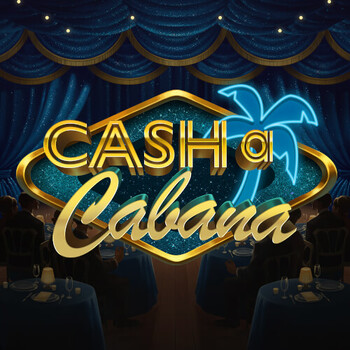 Produced by
Play N Go
With Cash-a-Cabana game, you can get a drink and a front-row ticket to the hottest club in town. Cash-a-Cabana, a video game created by Play'n GO, celebrates all that is glitzy and great about cabanas.
Here, you'll find sparkling hosts and dancing showgirls who will put a grin on your face. The slot machine only has five reels and twenty paylines, but it doesn't stop the excitement. You might win up to 10,000 times your wager in this slot machine if you can dazzle the showgirls. Play Cash-a-Cabana and know more about the game.

New Play'N GO slot Cash-a-Cabana online transports gamers to a more passionate era. The Cabaret Show is where the 5 reels, 3 rows, and 20 paylines are located.

The game's minimum and maximum bets per spin are just 0.05 and 100, respectively, making it ideal for both novice and big roller gamers. Similar to other video slots, the requirement to win is to line up three or more identical symbols in a row starting from left to right on a payline. The maximum payoff is up to 10,000 times the bet.

Regarding features, the Copa Girl is the Wild Symbol and the host of the show is the Scatter Symbol. When the Copa Girl expands to fill an entire reel, it also adds a multiplier.

On a stage with a blue curtain over the top and some palm trees on the sides, the Cash-a-Cabana online slot is held. I'm puzzled how the game's creators came up with the name, but it appears that the carnivals and a well-known Brazilian beach served as inspiration.

As you spin the reels, the Cabaret show has cocktails, musicians, cigars, and relaxing noises. With a few small exceptions, the slot is equally appealing on computers and mobile devices.

The traditional 10, J, Q, K, and A are the slot machine's low-paying symbols in Cash-a-Cabana, paying 1x to 5x for landing five of a type on a payline. A Whiskey Glass, a Shrimp Cocktail, a Couple, and a Musician playing a trumpet are some of the higher-paying game symbols. For five of a kind, these symbols payout between 10x and 100x.

Except for the Scatter Symbol, the Wild Symbol can be used to replace any other paying symbol.

The Copa Girl, Scatter Symbol, and Cabana Show bonus spins are the key components of the Cash-a-Cabana.

Any reel may randomly receive the Wild Symbol. Except for the Scatter Symbol, it can be used in place of other symbols. In the regular game, only one Wild Symbol may appear per spin; however, during the bonus spins bonus, up to three Wild Symbols may appear.

The Scatter Symbol in this game is the host of the show. These reels can include this symbol: the first, third, and fifth. Ten bonus spins are awarded when three scatter symbols appear on those reels.

During the bonus spins round, if you are fortunate enough to land Scatter Symbols, you will receive two additional spins for every Scatter Symbol you land, up to a total of 30 spins.

Additionally, The Copa Girl includes a 2x multiplier in the main game that is applied to any winning combination on that particular spin. Each Copa Girl in the bonus spins round raises the multiplier from 1x to 20, assisting players in achieving wins.

The Cash-a-Cabana slot machine has a retro aesthetic and an engaging cabaret show concept. Players will like playing the expanding Wild feature, multipliers, and bonus spins round. The action of the game moves quickly, and players can keep track of the paylines with ease.

Each symbol stands out and is visually appealing. Players will be charmed by the attractive soundtrack and the possibility of a large reward. Play Cash-a-Cabana and win.