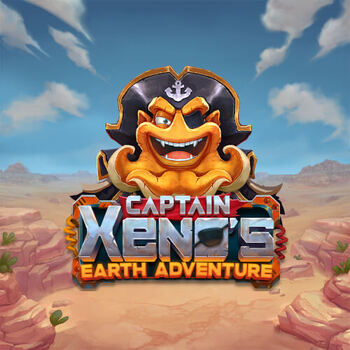 Captain Xeno leads a ragtag crew from an off-world conquest to earth to repair his ship without being discovered by the planet's population. This game pairs the splitting symbol feature with a group of feisty aliens, Electric Shocks, Emergency Wilds, Engine Recharges, and free spins.

Fixing Xeno's ship is possible on any device, where stakes are from 20 to 100 per spin before blasting off.  Maximum wins are up to 10,000x your stake when the ship has been fully patched up. Held on a 5-reel, 4-row game panel, players have 1,024 ways to win. Once symbols start splitting, ways to win increase, up to a maximum of 100,000 at full splitting capacity. 10 to Ace royals are the low pays, slinging out wins worth 0.3 to 0.4 times the stake for five of a kind. Five high paying symbols appear on the reels as characters named Atom, Drox, Boon, Chief Mechanic Filla, and Captain Xeno. When five premium symbol combinations hit, players collect rewards of 1 to 3x their stake. Wild symbols can land anywhere, possessing the same value as the highest premium, and can substitute everything except the scatter.

Splitting symbols increase ways to win with game modifiers and free spins.  In the Electric Shock feature, one symbol type is randomly selected to be the splitting symbol.  The symbol splits into 2 except scatters or wilds. On any normal spin, one to five Emergency Wild symbols may be added to the reels where a win is guaranteed to hit. The Engine Recharge, where 2 scatters may be added to the reels, increase the chance of triggering the free spins bonus round. Landing 3, 4, or 5 scatters awards 8, 10, or 12 free spins, respectively. Triggering scatter symbols carry over to free spins. Filling the scatter collector upgrades the splitting symbol feature and awards extra free spins.

Register to Captain Xeno’s Earth Adventure on Genting Casino, playable on all mobile devices. Are you playing longer than planned? Take a break. Gamble responsibly.