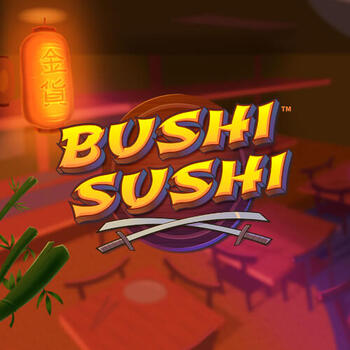 Get ready to taste different flavors of Sushi with Bushi Sushi by Microgaming! Played on a 5-reel 3 row set up, with 10 pay lines. Wins pay from left to right and right to left. The lowest playing symbol being a “J” symbol, followed by a “Q” symbol, a “K” symbol, an “A” symbol. What’s Bushi Shushi with out the Sushi symbols! The lowest playing sushi symbol being a “Teal Sushi Red Square” symbol, followed by a “Green Sushi Blue Hexagon” symbol, then a “Red Sushi Green Octagon” symbol, and finally an “Orange Sushi Orange Decagon” symbol. Aside from the standard paying symbols, the game features two symbols with its own features. One of the symbols is the “Yin Yang” symbol. The “Yin Yang” symbol or the BONUS symbol awards you with the free spins feature. The Free spins feature contains different awards; 5 consecutive bonus symbols award 10,000.00 along with 20 free spins, 4 consecutive bonus symbols award 4,000.00 along with 15 free spins, and finally 3 consecutive bonus symbols award 2,000.00 along with 10 free spins. Take note that only the highest combination of bonus symbols will be awarded for each win direction. The other playing symbol is the “WILD” symbol. Every time a wild lands on a reel, the wild will then expand to form a wild reel. When there are other wild reels that form adjacent to the other wild reels, they will form a larger image. Wilds can substitute for all symbols including the bonus symbols, but this will still trigger free spins. The “WILD” symbols only appear on reels 2, 3, and 4. The reels are then enhanced with extra “WILD” symbols during free spins. Bets range from 0.10 up to 300.00

Play Bushi Sushi on Genting Casino available on any mobile device. Remember not to overspend and to set a budget on your sushi! Take time for a breather and don’t stuff yourself with too much sushi!