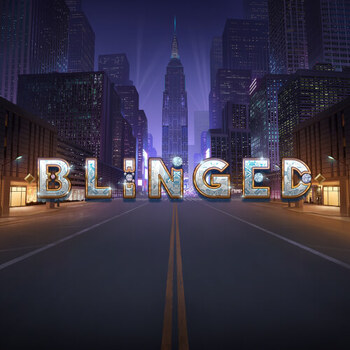 Cruise downtown along New York’s Fifth Avenue on a stretched limo, tanked up on champagne in this fun game with increasing wild multipliers and win spins.  Feel the rush as you put your head out the limo roof with win chances that can potentially boost payouts to a maximum of 5,000 times the stake. Get yourself Blinged with a bet starting from 0.10 to 100, playable on any device.

The bejeweled layout consists of 5 reels and 10 fixed paylines. The low paying classics are diamond-encrusted 10-A royals, followed by the high pays, dishing up bank notes, gold shoes, gold rings, and three young women. Landing five of the premium symbols awards from 25 to 75 times the bet. The woman with a hat who bears a striking resemblance to RiRi, is worth 100 times the stake for landing five matching symbols on a payline. She is also the game’s wild and replaces any other regular symbols except the scatter.  Scatter symbols which are the super-sized diamonds, appear only in reels 1, 3 and 5.  Hit three diamond scatters to trigger 5 win spins. These will result in either a win, or trigger  a round of respins which continue to retrigger until a winning line comes into view.

Each respin increases a win multiplier by a +1. When a win occurs from a respin, the accrued multiplier carries over into the next win spin. When scatters land on a win spin, it adds one extra win spin to the remaining amount capped at 20.

Landing two scatter symbols on a payline offers a consolation prize of 1 win spin. The same rule applies to all on-off win spins as when you land 5 scatters on a line.

There is no gamble feature in Blinged. When you win something, you get to run with it. Join the party by registering to Blinged on Genting Casino. Don’t forget to set a maximum spend, a loss limit, and even a single win limit. Never stake more than you can comfortably afford to lose.