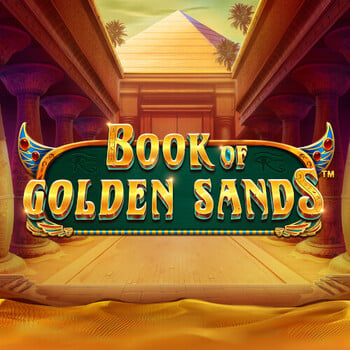 Produced by
Pragmatic
Pragmatic Play's Book of Golden Sands slot is a highly volatile ancient Egypt-themed slot machine with 6x3 reels and 729 chances to win. In all phases, multiplier wilds of x2 or x3 are awarded, while the bonus round's unique expanding symbol is accumulated above each reel. With each expanding reel trigger that follows, up to 10 additional places are added, and the maximum payout is 10,000 times your initial bet. The RTP for the Book of Golden Sands game is 95.42 percent. Play Book of Golden Sands for as little as 0.20 per spin.

About Book of Golden Sands

In the Book of Golden Sands slot game, Pragmatic Play increased the size of the game grid and added 6 reels and 3 rows. With this reel configuration, 729 paylines can be spread out over it. In order to win, you must also line up 3-6 identical symbols on a payline, adjacently from left to right.

Expanding Symbols and the Free Spins bonus round are common features in this class of games. The payments may also be increased by the use of multipliers. The greatest win possibility for this game is up to 10,000 times the initial wager, therefore it may offer good prizes.

Although the game's name refers to golden sands, we didn't spot a lot of them when we looked behind the reels. Only gold can be seen on the reels, but additional Egyptian details like statues and lamps add to the whole theme.

One of the game's strongest components is the music, which is complemented by fantastic animations that are themed appropriately. A typical Egyptian slot like this one hasn't been launched in a long time.

The Book of Golden Sands slot online has low-paying and high-paying symbols. For six matching symbols on a payline, the meagre Ankh-like icons pay 1.25x to 1.5x the wager. Three jewellery symbols followed by three character symbols have values ranging from 2 to 5 times the wager for a complete payline.

Additionally, the game has wild symbols that can appear everywhere but the leftmost first reel. Any regular pay sign in a successful combination can be replaced by it. Additionally, it comes with a chance multiplier of x2 or x3, which is only used if the wild contributes to a victory.

Bets can range from .20 to 100 on the Book of Golden Sands. This ideal betting range gives players additional possibilities for modest and high stakes wagers.

Book of Golden Sands online slot has amazing features that will keep you winning and entertained.

The scarab Wild symbol shows up on reels 2 to 4 to act as a pay symbol substitute and aid in winning combinations. The premium symbols pay between 2 and 5 times your stake for 6 of a kind wins. A multiplier of x2 or x3 is attached to the wild symbol, which increases any line wins in which it appears.

To enter the Bonus Round, which awards 10 free spins and an upfront scatter win of 2x, 10x, 50x, or 500x your wager, you must see 3, 4, 5, or 6 book scatters anywhere in view. Then, a randomly chosen pay symbol is chosen to transform into a special expanding symbol that fills entire reels and pays whether or not adjacent symbols are present.

Additionally, each growing sign is only seen once above each relevant reel. The following time it occurs, this gives the growing reels an extra place. You receive the 3 regular spots in addition to one position for each symbol you have gathered, up to a maximum of 10 positions. As a result, there are more chances to win, and the bonus round can be retriggered endlessly.

The game Book of Golden Sands slot machine is intriguing. The game has 729 win ways, which is rare, but it also has far lower symbol values than the normal book slot. The standard game can, at least theoretically, produce quite respectable rewards because you also get x2 and x3 multiplier wilds to add some spice. The real draw is the bonus round, which has an extremely unique twist we've never seen before. The reward of 10,000x justifies the effort. Play the Book of Golden Sands and win.