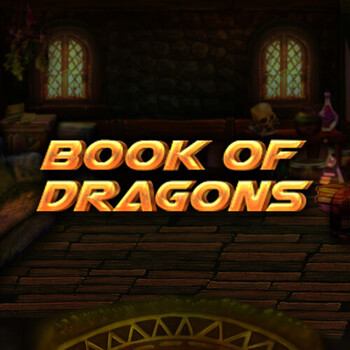 Legend tells a story about a book, not just any ordinary book, but one that is magical in nature. It is said that anyone who possesses it, will unlock the secrets of the dragons of old. Locked away deep in the depths of a mystical castle and has been forgotten by most but not you. It is time to quest through the Book of Dragons! Played on your usual 5 x 3 reels with 10 winning pay lines and the possibility of earning as much as 1000 times the stake, Book of Dragons will surely capture your imagination with its outstanding amount of features paired with high quality audio and visuals. Book of Dragons has a considerable RTP of 94.53% with minimum bets starting at 0.10 upto a maximum of 100.

Featuring the Gamble Mechanic where every winning spin gives you a chance to get bigger rewards. Opt to do so and the game will transition to a different interface where you can try and guess the color of the card presented before you which doubles your win or guess the suit of the card which quadruples your win. Landing The Book of Dragons (the Scatter Symbol) on reels 3, 4 or 5 will make it expand to cover the entire reel and create winning lines while the other reels without the Expanded Book of Dragons, Respins. Landing the Scatter Symbol again on reels 3, 4 and 5 during a Respin will retrigger the Respin. There is a chance to spin a Bonus Wheel when the Book of Dragons expands. Spinning the Bonus Wheel gives a chance to earn multipliers, extra spins and a Grand Prize. The amount of the Grand Prize depends on the amount of Scatter Symbols that has triggered it, 3 Scatters awards you with 300x the stake, 4 Scatters awards you with 500x and 5 Scatters awards you with 1000x.

Are you ready to uncover the secrets of ancient mythical beasts? Play Book of Dragons  in Genting Casino. Also available on all mobile devices.