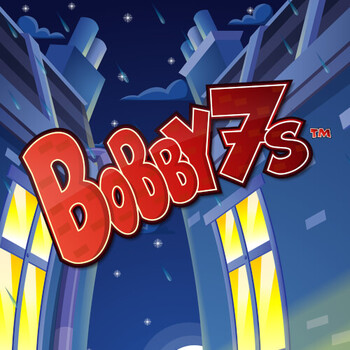 This cops and robbers slot plays out in 5 reels and 25 paylines. Four bonus features that appear frequently are on offer for players to enjoy fast cash wins. Players can bet from one to all 25 paylines with coins from 0.02 to 5.00. The lowest bet per spin is 0.02 on one line while the highest is 5.00 on all 25 lines for a maximum possible wager of 125.00.

The paytable is made up of classic slot machine fruits. From the highest to lowest, they are a watermelon wedge, a strawberry, a plum, an orange, a lemon and two cherries. An angry bobby is the wild, replacing any symbol except the Judge, Police and Crook 7s Bonus Game symbols.

All prizes are doubled during the Free spins feature and activated when the masked Thief symbol appears. Click on one of the thieves to reveal the number of free spins available. Bonus games are represented by the Lucky 7 symbol with a character. The Crook is in black and white prison stripes, the Police has a bobby blue 7 and the Judge is a red number 7 with a gavel beside him. Players can win up to 40x the bet when the Crook appears. Click on one of the crooks to win a prize equal to the loot in his bag. When the blue Police 7 appears, the screen switches to show a ladder marked with numbers. Select high or low to guess what the next number will be. Choose correctly to move up the cash ladder. Choose wrong and the game ends awarding the current prize on the ladder. Land the red Judge 7 on the reels and the judge's gavel slams down. The number of times it slams equals the multiplier of your bet, up to a max of five times.

Register to Bobby 7s on Genting Casino to play this classic hot pursuit between cops and robbers. This fun, easy-to-play game is available on all devices. Only gamble money you can afford to lose. Set your limits and play within them.