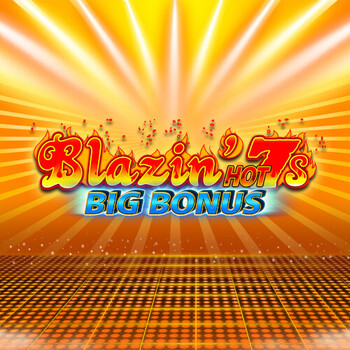 Blazing Hot 7’s Big Bonus allows the player to stake as low as 0.20 and as high as 20, don’t forget the higher the stake, the higher the potential rewards. This game has an obvious retro style to it, its symbols are a clear sign of the game’s style. The lower-rewarding symbols are the Plum, Lemon, Orange and Cherry the top prize for these symbols are 80X the player’s stake. The Bar symbol’s Top Prize is 100X the player’s given stake. The Melon symbol’s top prize on the other hand is much higher, going up to 150X your given stake. The Star symbol can give you a top prize of 200X your given stake, while the Hot 7 symbol, the highest rewarding symbol in the game can give you up to 300X your stake. The final symbol present within the game is the Bonus Symbol which rewards you with twelve free spins.

To get rewards you must land at least three to five bonus symbols or fruits. The Blazin’s Wild Sevens os the game’s wild, this symbol can substitute other symbols in a winning combination. If you are able to land three, four or five Bonus Symbols you will be able to play eight, ten, or twelve free spins, with each spin your chances of getting a winning combination are higher.

Play Blazin Hot 7’s Big Bonus  on Genting Casino, it is available to play on any device. Decide and set your gaming budget and adhere to it.