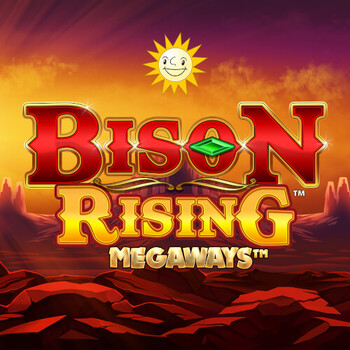 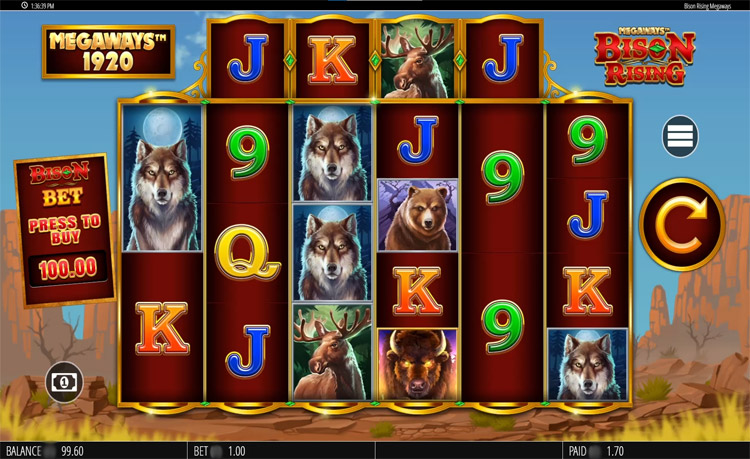 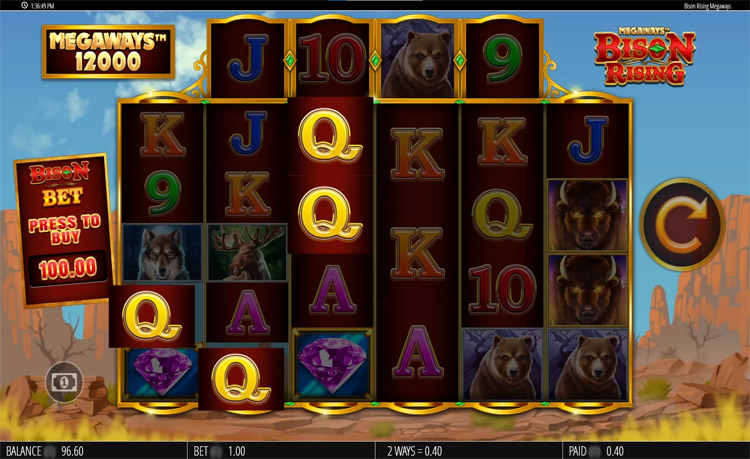 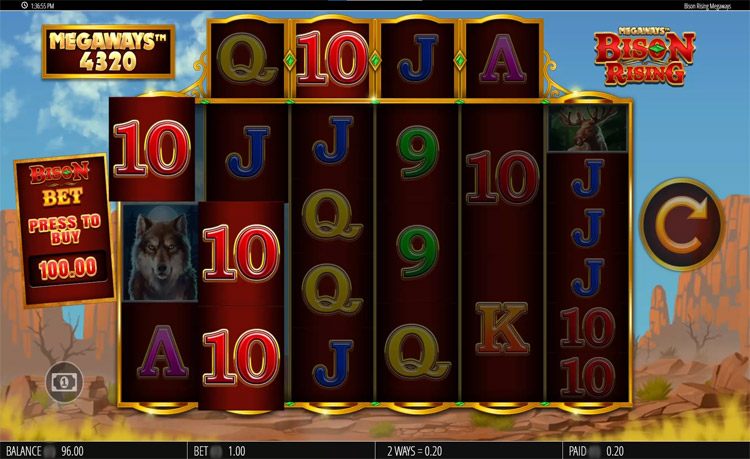 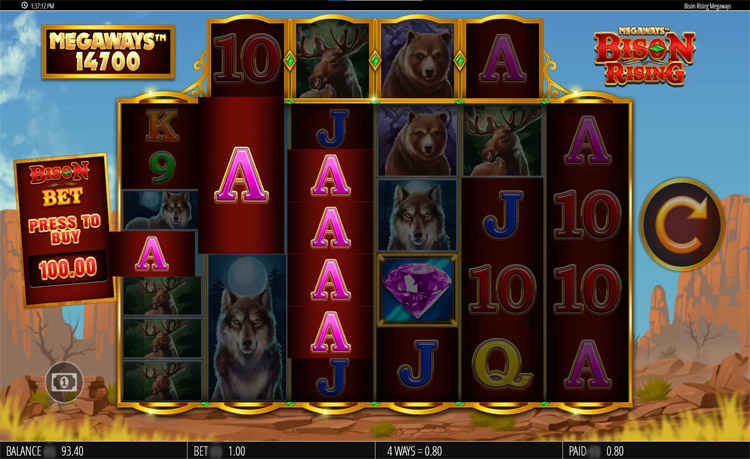 The Megaways game engine is responsible for the overall layout of the Bison Rising Megaways slot which consists of 6 reels and between 2 and 7 rows. And speaking of Megaways, you can anticipate to win in up to 117,649 distinct ways when this is in operation. The game is playable on all platforms and allows you to place bets ranging from 0.10 to 10 per spin. This is a smaller collection than Blueprint Gaming's other Megaways titles, but it still provides a good selection.

There is a 96.50 percent RTP on the Bison Rising Megaways slot online. The volatility is estimated to be medium to high, yet the multipliers available in the free spins round can change the volatility. This title has a maximum win of 10,000 times your stake. The reels feature playing card symbols ranging from the green 9 to the purple A.  A symbol of a huge moose, a wolf, and a grizzly bear follow. In addition to offering you 50 times your bet for a 5-of-a-kind combination, the buffalo is the highest paying standard addition.

You can tell as soon as you play Bison Rising Megaways slots that it's inspired by the American heartland. This is a six reel slot machine, which means you have a lot more chances to win!

The game is adorned with high value symbols from the wild: wolves and bears, caribou and of course the mighty buffalo. Match three or more of these symbols and you'll be in for the sort of big payout wins that only the riches of the American heartlands can bring you!

Representing the material wealth of this mighty continent are the pink diamond scatter symbols. Match four of these and you will be awarded up to twelve free spins to give you the best chance of winning at no cost to you!

You also need to watch out for the Canyon symbol: anything could be at the end of this canyon; you will discover when it settled on the reels and transforms, to reveal any other symbol in the game. This could turn a dud spin into a massive payout!

Enjoy the thrill of playing Bison Rising Megaways slots online on desktop, mobile, and tablet devices in your quest for gold! 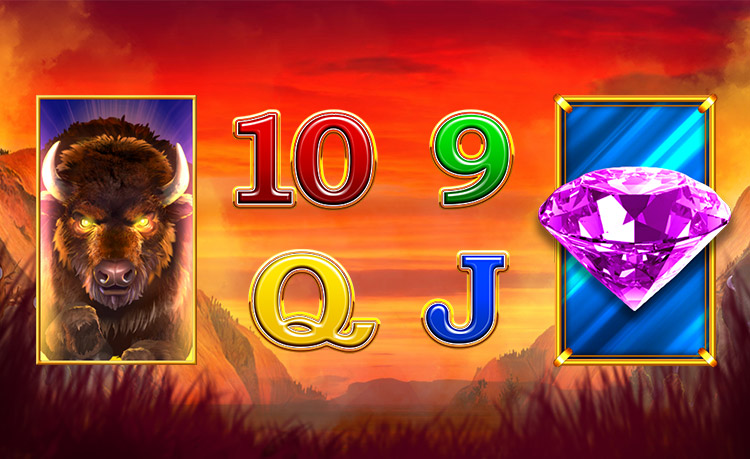 You can place a stake ranging from.10 to 10 coins. One set of reels runs the length of the screen, giving you up to 117649 possibilities to win on a spin. Each reel may carry between 2 and 7 symbols, and there is another set of reels at the top. With the autoplay feature, which can be found on the bottom right of the reels, you can let the computer do the work for you. You can choose between 10, 25, 50, 75, or 100 automated numbers of plays, which means the reels will spin continuously until they run out or you choose to stop the feature.

In addition, the player can establish loss and single win limitations, giving them more control over their game and supporting responsible gambling. The paytable, which contains symbol values as well as information about the game's features and bonuses, may be accessed by clicking the “I” in the top right corner.

When three (in the case of the buffalo symbol, two) symbols land on the reels, a win is made. New symbols fall into their positions whenever a winning combination occurs. This process continues until no new winning combinations are discovered. This cascading reels feature helps you land many prizes on a single play for a more engaging online gaming experience.

What is the maximum bet for Bison Rising Megaways?

The maximum bet for Bison Rising Megaways is 10.

What is the minimum bet for Bison Rising Megaways?

The minimum bet for Bison Rising Megaways is .10.

Can I play Bison Rising Megaways on mobile?

Yes, you can. It is fully optimized for mobile devices for both iOS and Android.

What is the RTP of Bison Rising Megaways?

The RTP of the Bison Rising Megaways slot game is 96.5%.

What is the biggest potential win for Bison Rising Megaways?

Bison Rising Megaways has a maximum win of x10 000 of your stake.

About the Game Provider: Blueprint Gaming

Since 2008, Blueprint Gaming, a game production firm located in the United Kingdom with headquarters in Newark and Malta, has been a subsidiary of the Gauselmann Group in Germany. Gauselmann is a family-oriented entertainment company whose objective is to deliver engaging games with tiny prizes for small investments. Blueprint, as part of this group, creates and distributes its own original online slot games as well as games for other companies. Blueprint Gaming's diverse portfolio guarantees that the company has a broad appeal that appeals to all types of slot fans. All types of gamers can play the games they desire while remaining confident in the fact that production quality, fairness, and entertainment value will always be assured. Blueprint Technologies Ltd is licensed by the Malta Gaming Authority and popular slot titles created by this developer include Eye of Horus, Genie Jackpot Megaways, and TED.

The Bison Rising Megaways game is one of the many games available at Genting Casino. It has a payout ceiling of 10000 times your wager. You may play a range of table games and live casino games on the site, which features a guest-friendly design. There's something for everyone, from simple games to video slots with a variety of bonuses and features. On your iPhone or Android phone, you may play Bison Rising Megaways slot.