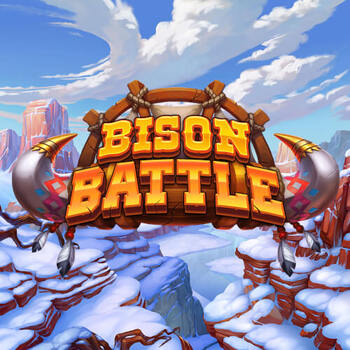 Saddle up and journey to the wild Mesa. If exploring deep canyons and intrigued by harsh wildlife, then Bison Battle is the game for you. Bison Battle has 5 x 4 reels with 20 pay lines and a possibility to win an enormous 50,000 times the stake.

Bison Battle features several ways to win. The player must land 3 or more symbols in a line in order to win. Landing 5 of the same lower paying symbols which are the Heart, Diamond, Spade and Club will double your pay out. Landing 5 of the higher paying symbols which are the Eagle, Bear, Wolf and Lynx will net you between 10 times up to 50 times the stake. The game’s Wild Symbol is the Golden Bison Symbol and can only Land in reels 2,3 and 4. There are three other differently colored Bisons in the game to represent the Scatter Symbol, these are the Blue, Green and Red Bison Symbol. The Red Bison Symbol only lands on reels 1 and 5. If it lands on reel 1 it will pay out instantly by 5x, 10x, 25x, 50x, 100x, 250x, 500x, 1,000x, or 2,500x and if the it does not land on reel 5 on the next spin it will move 1 step to the right for each succeeding spins. The Red Bison that lands on reel 5 will instead move to the left and will multiply the stake by 1x, 2x, 3x, 4x, 5x or 10x. Landing them both on the same spin will activate the Bison Clash feature which will apply the multiplier and pays out instantly. Clashing the Blue Bison with the Red Bison activates the Ice Park feature which will change the theme into snow-covered canyons and instantly nets you 3 Free Spins and while in this mode every time you land a Red Bison or Coin Symbol will grant you 3 Free Spins. Clashing the Green Bison with the Red Bison then the Green Valley feature which changes the theme into grass-covered canyons and will award you 8 Free Spins instead and while in this mode Golden Bison that lands on reel 2, 3 and 4 will stay in position for the rest of the remaining spins, also landing a Red Bison will grant you 1 Free Spin.

Bison Battle comes with a reasonable RTP of 96.41% and minimum bets starting at 0.10 and a maximum of 100. Test the true might of the Bison when you play Bison Battle here Genting Casino.